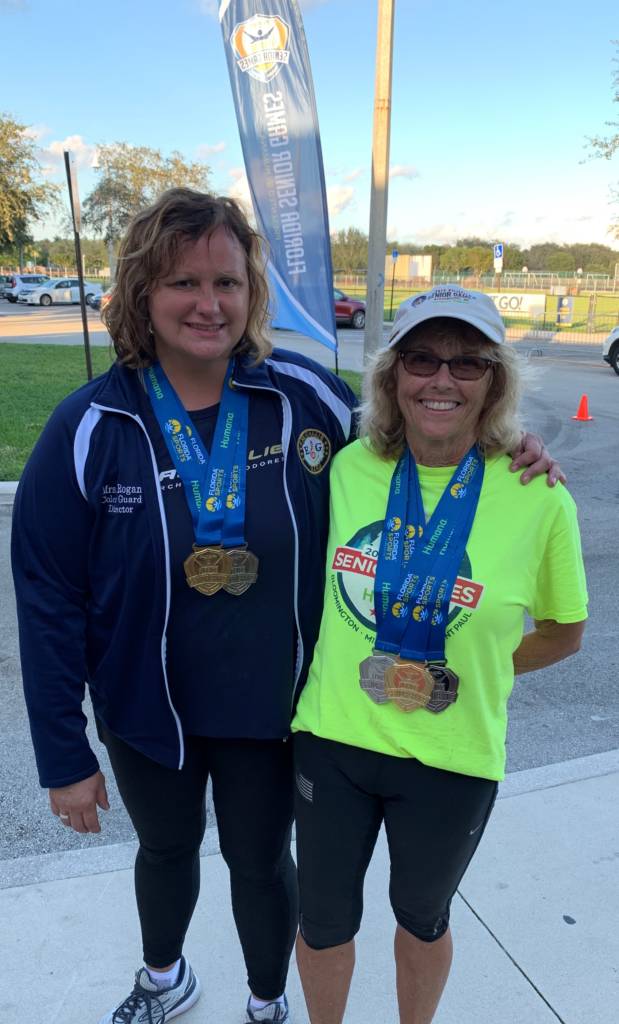 FORT LAUDERDALE – Florida Senior Games athletes competing in the five sports on Saturday in the Greater Fort Lauderdale accounted for 650 of the over 1,800 athletes in the 2021 Games.

Here’s some of their accomplishments.

At the 5K Road Race, Power Walk and Race Walk that started the day at Vista View Park, the runners and walkers combined to run and walk 198.4 miles.

The Track and Field athletes competing in the Field Events at the Ansin Sports Complex made 458 throws and 353 jumps.

Finally, Bowlers on the lanes at Strikers Family Sports Complex, knocked down 44,922 pins in Men’s and Women’s Doubles, Mixed Doubles and Team competition.

On top of all that 42 age group records were broken in Bowling, Road Race, Race Walk, Swimming and Track and Field.
The day’s first event, 5K Road Race saw Robert Thornhill, of Lakeland, crossing the finish line as the first overall finisher with a time of 18:32.99.  Thornhill left the 5K Road Race to compete in the swimming 200 yard freestyle and won a 50-54 age group bronze medal. He was also the top 5K Road Race finisher at Vista View Park in 2019 as well.

It was mentor and protégé day at the field events of the Track and Field championships as two coaches competed alongside their former athletes at the Ansin Sports Complex. Neva Weiskopf, of Lehigh Acres, threw the shot put with Joy Fleet Rogan, of Melbourne (both pictured above), who she taught and coached at Roxbury High School, in New Jersey.

After catching up on Facebook, Neva noted that Joy was approaching Florida Senior Games competition age and coaxed her into joining her at the 2021 Games.

“She was like a surrogate mom to me, besides a coach and teacher, in high school,” said Rogan. “She came along at the right time in my life.”

Ahmed Shabazz, of Pendleton, SC, caught up with Paul Sabree, who he coached at Pendleton High School. Shabazz competed in six field events Saturday and will run in four events Sunday. Sabree will compete in 50 and 100 meter dash on Sunday.

Besides his coaching career in South Carolina, Shabazz also coached the Army Ranger Track and Field team in Japan from 1968-71.

At the Coral Springs Aquatic Center, 26 swimming records broken. Four swimmers set records in all three events they swam on Saturday. Paula Texel, of Clearwater, set new marks in the 50-54 age group in the 200 freestyle, 200 backstroke and 100 IM. Michael Aubrey, of Wilton Manors, had record-breaking performances in the 60-64 age group 50 and 100 breaststroke and 100 IM. Mike Freshley, of Orlando, broke 80-84 age group records in the 50 and 100 breast and the 100 IM.  Gordon Ralph, of The Villages, was a 90-94 age group record breaker in the 50 breaststroke and 100 and 200 backstroke.

Corrine Bjerke and Dennis Farris, of The Villages, set a new Mixed Doubles Bowling mark in the 70-74 age group with a combined score of 1,246.  They topped the previous mark of Ona Wood and Harry Witt, set in 2017. Farris had a three-game total of 631, while Bjerke had a 615 in her three games.

Bjerke also teamed with Luanne Giragosian, of The Villages, to set a new women’s doubles mark in the 65-69 age group with a 1,220, breaking the previous record of 1,155, set by Erlene Kapiton and Arlene Lavine in 1995. It was the longest-standing Florida Senior Games Bowling record until Saturday when Bjerke and Giragosian topped the mark by 65 pins. Bjerke tallied a score of 651, while Giragosian rolled a 569.

The final day of the first nine days of the 2021 Florida Senior Games is Sunday with competition continuing in Bowling (Men’s and Women’s Singles), Swimming, Track and Field (Running Events and Race Walk/Power Walk 1500M) and Volleyball (Men’s).  Powerlifting will also be held at Nova Southeastern University Rick Case Arena at the Don Taft University Center.