2023 National Senior Games Return to Pittsburgh, “The City of Champions” 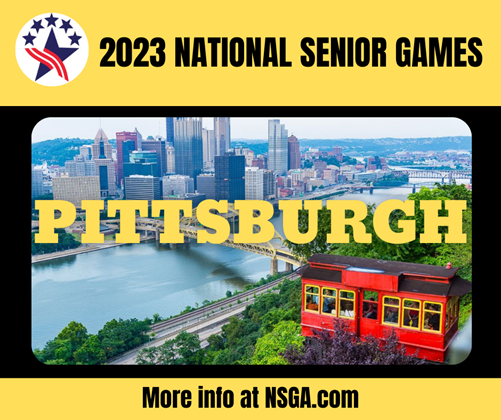 Pittsburgh will host the 2023 National Senior Games for the second time in the history of the massive 50+ multisport event.

The news was announced April 14 at a gathering of city officials, games organizers and invited athletes at the Senator John Heinz History Center. Summer dates for the 2023 Games will be determined as plans are formalized.

The city also hosted the National Senior Games in 2005. National Senior Games Association (NSGA) CEO Marc T. Riker said much has changed for both the city and the biennial event since that time. “The city has seen a transformation of its Downtown and has many new offerings,” Riker said. “We plan to extensively use the David L. Lawrence Convention Center as our hub of activity. Overall, the NSGA team agreed that Pittsburgh will pleasantly surprise our athletes with what is offered.”

Riker also noted that in 2019, The National Senior Games held in Albuquerque set an all-time participation record with nearly 14,000 athletes competing in 20 sports over a two-week schedule, with an estimated $35 million local economic impact. “Those Games made us the largest qualified multisport championship competition in history, so Pittsburgh will also be surprised at the magnitude of the event and all of our expanded activities to engage the community,” Riker told the gathering.

Pittsburgh officials emphasized how the city has been growing and transforming itself, with new urban improvements, venues, attractions and hotels that will enhance the quality of the athlete experience.

“SportsPITTSBURGH is thrilled to welcome the National Senior Games back to the City of Champions in 2023, and we would like to thank the NSGA for trusting Pittsburgh to host this prestigious event,” SportsPITTSBURGH Executive Director Jennifer Hawkins said. “Not only is our region the definitive destination for major sports events, it’s also a major leisure tourism destination with unique attractions and outdoor activities, world-class accommodations, an award-winning restaurant scene and so much more. We aim to provide the athletes with iconic experiences both on and off the playing fields, and we plan on delivering on that goal in 2023.”

Selected local athletes, some who started Senior Games in Pittsburgh in 2005, and others who earned medals in the most recent games in 2019, were invited to the socially distanced gathering. Some brought scrapbooks and souvenirs to share their 2005 experiences. “We’re all so excited with this news,” said 67-year-old Nancy Brown of Butler, who earned one Silver and one Bronze Medal in Volleyball in 2019. “It’s great to see that many people were motivated to start competing here in 2005 and are still healthy and going strong. That shows the impact Senior Games have wherever they are held.”

Riker commended the Pittsburgh organizing committee for making a compelling bid presentation. “now has a team of sport event professionals in place to help fulfill the needs of the events hosted by the city,” he explained. “This is a best practice that helps attract more events and economic benefits, because the team can hit the ground running and further enhance the reputation of Pittsburgh as a can-do city.”

“One thing that we hear from athletes about 2005 was how friendly and accommodating Pittsburgh was,” Riker continued. “We have experienced the same warm welcome and assistance from the 2023 organizing team since the beginning. It already feels like we’re part of the family, and we’re just getting started!”

The Keystone State Games hosts the annual Pennsylvania Senior Games, which serve as the state’s qualifying event for the National Senior Games. Qualifying for the 2023 Games will take place in 2022 in Luzerne County. “We’re proud that Pittsburgh has been selected again, and excited to help spread the word,” Executive Director James Costello said. “There’s always a surge in new people coming to qualify in the state where Nationals are hosted because of the close proximity. It also means more Pennsylvanians will be finding Senior Games as a great outlet for maintaining fitness and enjoying the camaraderie among their peers.”

Competition is for athletes 50 and older and organized in five-year age divisions with medals awarded for each level. Due to the pandemic, the next biennial National Senior Games are rescheduled from 2021 to May 10-23, 2022 in Greater Fort Lauderdale.

The National Senior Games Association (NSGA) is a nonprofit Multisport Council member of the United States Olympic Paralympic Committee that promotes health and wellness for adults 50 and over through education, fitness and sport. Since 1987, NSGA has governed the biennial National Senior Games, the largest multi-sport championship event in the world for seniors. The Association is comprised of 53 independent Member Games that conduct qualifying competition events. For more information, please visit NSGA.com.

As a division of VisitPITTSBURGH, SportsPITTSBURGH’s primary goal is to attract and host a wide variety of sporting events while providing planners and local stakeholders with the expertise and professionalism required to host a world-class event in the Pittsburgh region. Pittsburgh, the “City of Champions,” is dedicated to hosting events that make public health and safety top priorities. For more information on Pittsburgh’s health and safety protocols, visit sportspittsburgh.com.