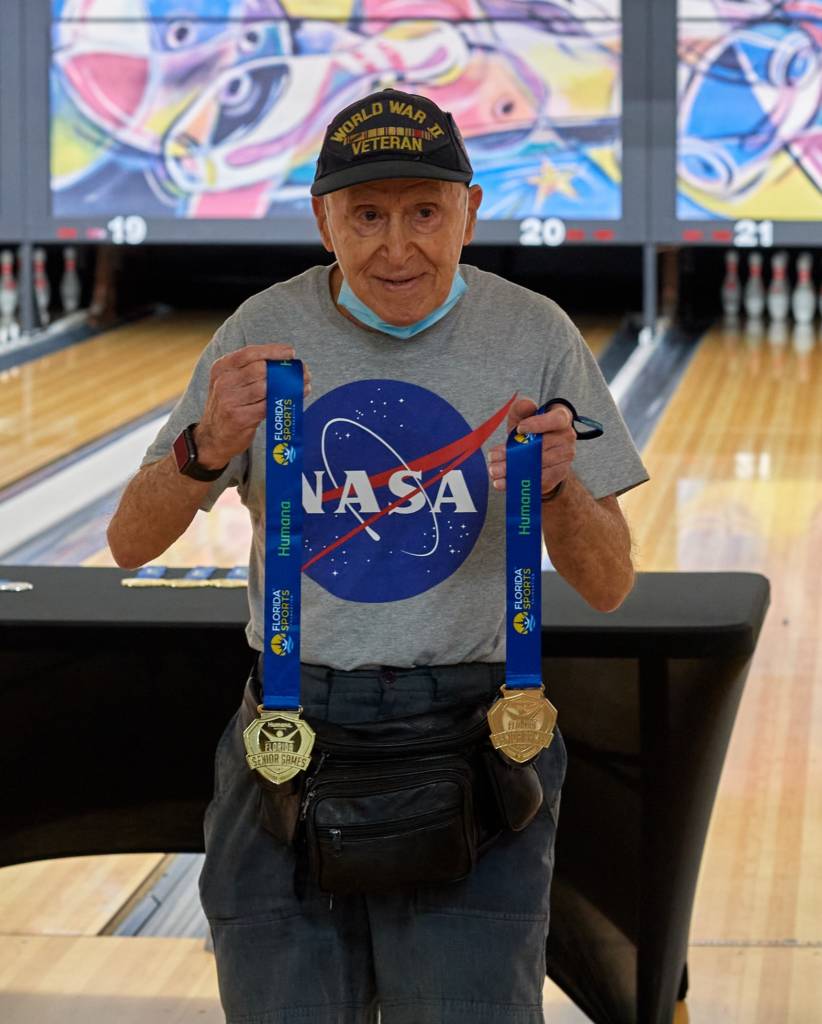 Here’s a look at 10 Outstanding Accomplishments in the First Five Days of the annual Olympic-style Sports Festival for athletes age 50 and Over.

Two Shots Fall in the Final 11 Seconds in Basketball Thriller

The only two women’s basketball teams competing in the 2020 Florida Senior Games, The Villages Seabreeze and the Broward Heat, had the most exciting finish of the day with a game-tying and a game-winning shot falling in the last 11.7 seconds of the contest.

Following a time out and down 30-27, with 11.7 seconds remaining, the Broward Heat’s Marilyn Rule sunk a three pointer to tie the game at 30. The Villages Seabreeze quickly passed the ball to the top of the key, to rerset in the 3-on-3 halfcourt game, and worked the ball inside to Eugenia “ET” Uhlman, who found the net to put the Seabreeze ahead 32-30 with 1.0 second on the clock. The Heat attempted to get the ball in for a shot, but was unsuccessful.

“ET phoned home,” one of her teammates loudly proclaimed in the post-game celebration.

Dead Eye with a Basketball and Bags

Following her three gold medal performances in Basketball Shooting, Claudette Braswell, of Lake Wales relocated to the other side of Arena A of the Wiregrass Ranch Sports Campus for Bag Toss.

For the five women’s participants, Sport Director Ryan Schwartzkopf created a double-elimination bracket to crown an overall champion. Braswell, who was competing in the 80-84 age group, won her first three matches to advance to the championship round,

Her opponent, Paula Hahnert, of The Villages, who had previously lost a match to Braswell, won the first round championship match, forcing an if necessary game.

Braswell, the 2009 FSG Female Athlete of the Year, took a commanding 19-3 lead before Hahnert had a six point round to cut the lead to 19-9. The pair then cancelled each other’s scores leading to two rounds of no points, before Braswell scored a 21-9 win.

Corwin teamed with Betty Gross, also of Boynton Beach, to win the 85-89 Mixed Doubles gold meda. Both Corwin and Appel returned on Sunday for Men’s Singles competition with Corwin winning the gold in the 95-99 age group and Appel taking the silver..

If There’s an Age Group – There’s a Record

It was a record-setting weekend at the Cocoa Beach Aquatic Center as 27 age group records fell in the 34 men’s and women’s events.

Leading the way was Jerry Marchbanks, of Tequesta, who set five records in the 85-89 age group. His record-breaking performances ranged in times from four seconds to 23 seconds. Marchbanks adds his name to the Florida Senior Games Record Book in the 100 Yard Butterfly, the 50 and 100 Breaststroke and 100 and 200 Individual Medley. Prior to this weekend, Marchbanks held one record, the 80-84 age group 400 Individual Medley.

Pulling Back the Bow in Newberry

More records fell at the Easton Newberry Archery Complex, in Newberry, on Sunday, with 11 record-setting performances. Weston’s Melanie White, shot an 882, in the Compound & Release event, to top her own previous all-time best women’s score in the event, an 877 in 2013. White holds the Compound & Release age group records in the 50-54, 55-59 and 60-64 age groups.

90-Year Old Swings a Racquet and Paddle for Gold Medals

After winning a pair of Florida Senior Games Racquetball gold medals over the weekend at Richey Racquet, in Port Richey, Don Husmann made a stop in Gainesville, on his way home to Atlantic Beach on Tuesday, to win two more gold medals including a Men’s Singles gold in the 90-94 age group in Table Tennis.

Husmann, played matches against Deane Chickering, of The Villages, and Robert Johnson, of Sun City Center, both registered in the 85-89 age group to win the 90-94 gold medal. He paired with Johnson to form an 85-89 age group team to face Chickering and John Shultz.

Over the weekend, he played a Men’s Singles match against Jimmy Petrandis, an 85-89 age group layer from Tallahassee, and teamed with Petrandis to play three matches in a combined pool with younger Men’s Doubles age groups.

Husmann began playing Racquetball once he retired in 1992 and later picked up Table Tennis. He played in the Massachusetts and New Hampshire Senior Games before relocating to Florida in 2013. He has competed in the National Senior Games since 1995 and represented Florida in the 2015 Games in Minneapolis and he 2017 Games in Birmingham.

At the 2017 National Senior Games, Husmann and his partner, William Burg, won a Men’s Doubles bronze medal in the 85-89 age group. But it came with consequences. Diving for a ball, he tore his rotator cuff.

“I got to the ball and it hit the front wall and then it hit one of my opponents,” Husmann said. “We got the point to tie the score 8-8, but after that we lost the match 11-8.”

The Streak Goes On

Winning a medal for the 28th consecutive year, was John Shultz, of Lakeland, who won the Men’s Singles 80-84 age group gold medal. He extended the longest consecutive years medal winning streak of any athlete in the history of the games, and was  undefeated in five pool play matches against a very competitive field, according to Table Tennis Sport Director Brad Woodington.

“He was seeded third in the group of six by his ranking and is at the high end of the age group,” Woodington said of the 84-year old Shultz. “He played very well today.”

Shultz’s first medal winning performance came in the 1993 Florida Senior Games when he was competing in the 55-59 age group. Since that time, he has won medal sin six different age groups.

Adding to Their Collection of Gold

There was a collection of Florida Senior Games Tennis gold medalists on the courts at the Innisbrook Tennis Complex Wednesday in the Mixed Doubles bracket.

To advance to the championship match, Murray and Roscia battled back after a first set loss, to defeat Judi and Aubrey Whitaker of Lake Wales, 2-6, 6-3, 10-5. The Whitakers won three consecutive gold medals in the 65-69 age group from 2014-16.
It was the second matchup between Whitaker and Roscia in the last couple of days as the two met in the 70-74 Men’s Doubles final on Tuesday. Whitaker teamed with Gary Bartlett to defeat Roscia and James Bell to win the gold medal, with Roscia taking the silver.

For Golfers the Lower, the Better

Melanie Clegg, of Merritt Island, posted the lowest women’s scores of both days of the 36-hole event, at the Duran Golf Course in Viera, an 84 and 82, to win the 50-54 age group gold medal with the overall lowest two day total of 166. Her score was also the overall lowest women’s total since the 36-hole competition began in 2015 and established a new age group record. The previous two-day low score was 168, shot by Janet Brown, of Lakeland in 2016.

You Lose, You Leave in the Consolation Bracket

Four of the five brackets played in Women’s Doubles Pickleball at the Sarah Vande Berg Tennis and Wellness Center ended with an “If Necessary,” game. In three of those four brackets the consolation bracket team won twice against the undefeated team to win the gold medals.

Diane Bock, of The Villages, and Coleen Wells, of Groveport, Ohio, dropped into the consolation bracket after losing a semifinal match to Nancy Robertson and Sandra Metzler, of Naples. They defeated the bronze medalists Pat Sargeant and Jodi Yambor, of Tallahassee, to force a rematch against Robertson and Metzler. Bock and Wells won the first match 6-11, 11-6, 12-10 and then took the “If Necessary,” game 15-8.

It was the 10th women’s doubles gold medal for Bock since she began playing in the 50-54 age group in 2008. All totaled 55 women’s doubles teams were on the courts Wednesday.