A Picture is Worth 1,000 Words – Arthur Davis arrives at the 2002 Florida Senior Games 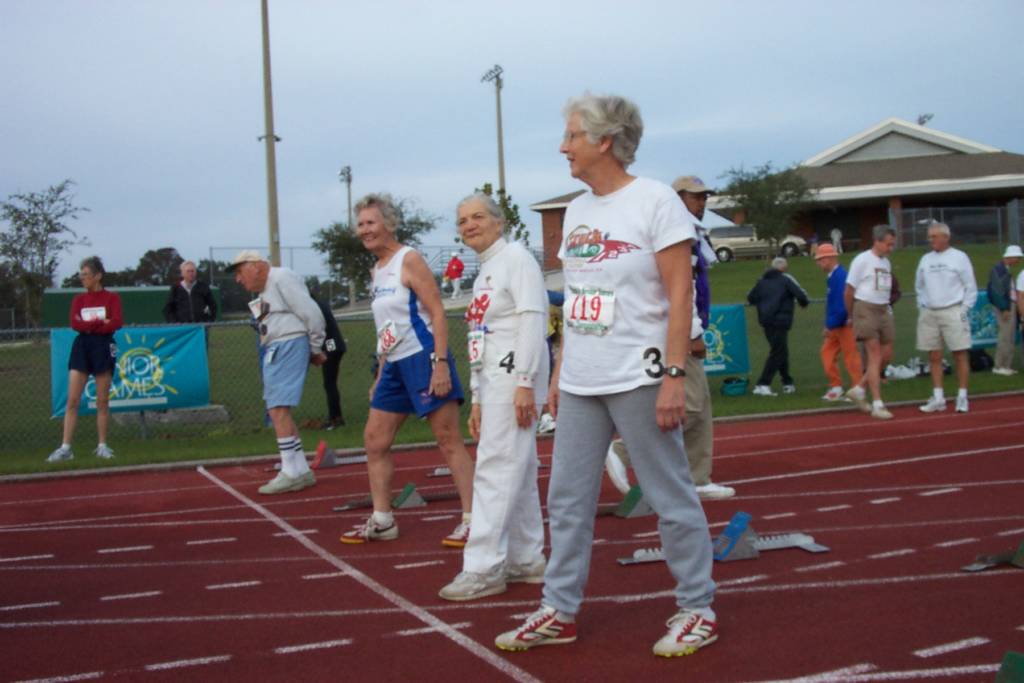 TALLAHASSEE, Fla. – It’s a moment in time captured by someone who just happens to be in the right place at the right time with a camera. The photo captures the image, but within the image, there’s a story worth being told.  At every Florida Senior Games event, there’s a story waiting to be told.  When we’re lucky, an image is captured to provide the evidence to back up the story.

In 28 years, the Florida Senior Games has seen its share of characters. That tends to be a trend when you have people gathered with a lifetime of experience and confident in themselves and their abilities.

The personnel and athletes in attendance at George Jenkins High School in Lakeland, Florida, on Saturday, December 14, 2002, were introduced to Jupiter’s Arthur Davis.

The 91-year old Davis, literally rolled up to the gate of the track on the south side of Lakeland in his mid-1980s, four-door sedan with his registration documents in hand.

The first question the Florida Senior Games staff wondered was, “How did this gentleman, navigate his sedan within a few feet of the track?”

Then there was the dilemma of how to fit Davis into the three events he wished to compete, as the meet was about to start.

Not wanting to turn away a nonagenarian who had just driven over 100 miles, the staff and sport director made room for Davis in the 100 and 200 meter dash and 400 meter run.

Between his late arrival, having to relocate his car to the parking lot and the time it took to figure out what to do with him, Davis missed running in the men’s heats of the 100 meter dash. So, he took to the start line in a women’s heat.

By the time, Davis lined up for the 400-meter run, fellow athletes and spectators were aware of the antics of the 91-year old athlete wearing the Michigan Wolverines sweatshirt.

For his two laps walking around the track, Davis used the aid of a golf club in the form of a cane. To keep the flow of the meet going on a chilly, overcast day, race officials moved Davis into an outer lane while proceeding with other heats in the 400-meter event.

Unaware he was still finishing the race, Al Treichel, of Spring Hill, who had just turned in gold medal-winning performance in the 70-74 age group with a time of 1:19.75, approached Davis and began leading him off the track.

Upon seeing what Treichel considered a well-intentioned action, a Games staff member informed him Davis was still competing in the event.

An embarrassed Treichel, who earned the 2000 Florida Senior Games Male Athlete of the Year Award, admitted, “I thought he had just wandered onto the track.”

As the 2002 Florida Senior Games were being featured in an hour-long highlights show by then the Sunshine Network, now Fox Sun Sports, reporter Jeff Brioshi sat down to talk to Davis on camera upon finishing the race.

After Brioshi asked him about his performance, Davis replied, “What am I doing here? Why am I doing this? I want to come back when I’m 100 years old. I probably won’t be able to do that after I’m 100. Maybe God will have some other suggestions for me. End quote.”

Yes, Arthur Davis wanted to make sure Jeff Brioshi knew he was finished with his statement and informed him that the quote had ended.

For the 25th Anniversary Florida Senior Games souvenir program, longtime Track and Field official, and later sport director, Tony Tussing, of Deland, was asked of a favorite memory from his experiences at the Games over the years.  Immediately, he blurted out, “Arthur Davis!”

Tussing continued, “The year we were at George Jenkins High School in Lakeland, we had the pleasure of meeting Arthur Davis, who drove up from down south.

He ran in the 100, 200 and 400 meter dash, but he didn’t really run.  He walked with a cane.  During the 100, when he reached the stands he doffed his hat to the spectators a couple of times as he made his way to the finish line.

In the 400 meter dash, one full lap around the track, we put him in his own lane and ran two other races before he finished.  There were a couple of tv cameras out there, and they were able to finish what they were doing and still catch up with him.  One started walking backwards in front of him to film him and had to slow down for him to keep up with them.

All of a sudden, he stopped and yelled, ‘Time Out.” By now, everyone was watching him, and we all looked at each other wondering what he was thinking.  He then turned his hat around backwards and said, “Now I’m ready to run.”

With his cap turned around backwards, Davis blazed toward the finish line with a time of 9:37.86.  All but one other runner finished the race in under two minutes.

It was the fact he finished the race that had those in attendance following his every move.  His spirit and determination had captured the hearts of those like Tony Tussing who had the pleasure of meeting Arthur Davis.

Unfortunately, Davis did not return to Florida Senior Games competition after his memorable performance at the 2002 Games in Lakeland.

However, for the next couple of years, track and field officials kept their eyes peeled for the oversized sedan heading toward the track at the last minute.