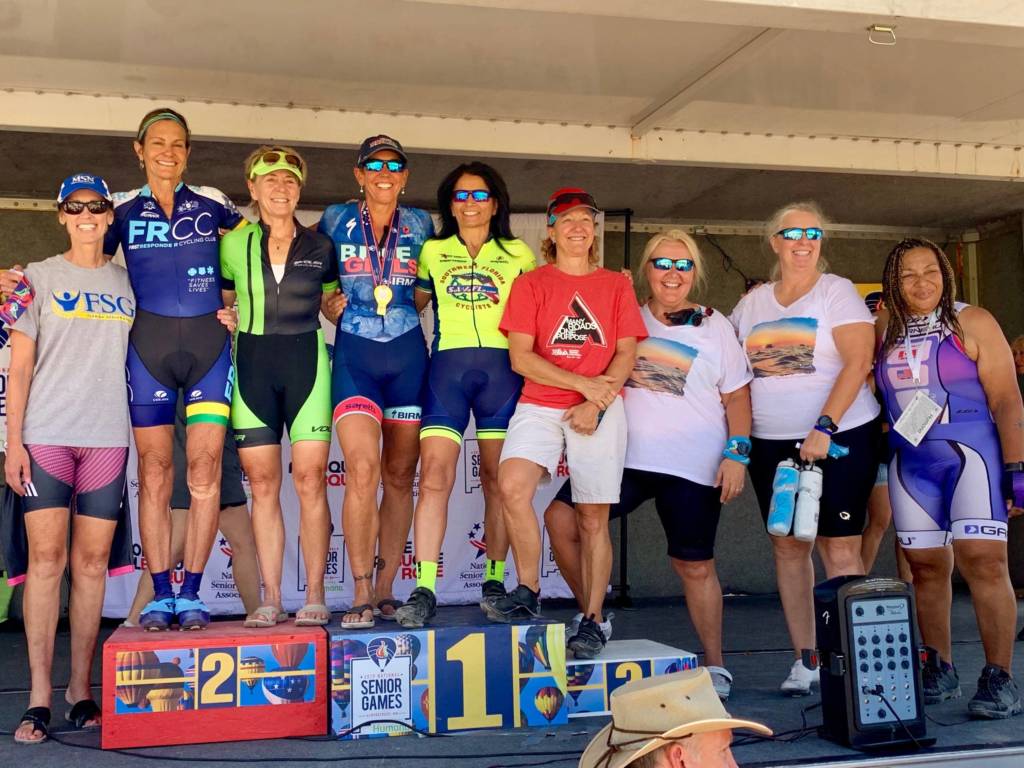 ALBUQUERQUE, N.M. – Florida’s senior athletes made themselves known at the 2019 National Senior Games, held in Albuquerque, New Mexico, June 15-24, winning a total of 450 medals, the third highest total of all 50 U.S. states.

The distance between Florida and New Mexico did not deter Florida athletes, as 687 made the trip out west for competition in 20 sports.

Another highlight of swimming competition saw two of Florida’s 90+ athletes in the water.  Shirley Chase and William Mitchell, both of St. Augustine, combined to win seven medals with Chase winning a gold and three bronze and Mitchell won a gold and two bronze.

In winning her gold medal, Chase was the most experienced of all swimmers, at 94-years old, in the 500-Yard Freestyle, an event requiring swimmers to complete 20 laps in the 25-yard pool.

After shooting an 87 in the first of three rounds, William Jones, Jr., from the Villages, climbed up from fifth place to win the Golf gold medal in the 80-84 age group.  Jones found himself seven strokes behind the leader after day one, but had the overall low score for the second and third days (78 and 81).

“It was just tough going there,” Jones said of playing at the Sandia Golf Course.  “Those greens were like nothing we ever play here in Florida. They were super slick.  The first day, I couldn’t get a handle on it.  I couldn’t get my brain to hit the ball that easy and my putts would go past the hole. I had seven three-putts the first day and that’s unacceptable. Somehow, the second day I got it down to five and the third down to three, which, to me, is acceptable.”

His three-day total of 246, was one stroke ahead of the second-place finisher, Marvin Selby, of Michigan. Selby was the leader after day two, four strokes ahead of Jones, but shot an 86 on the final day to allow Jones to win the gold medal.

The East Coast Bouncers won the Women’s 75+ Age Group Basketball gold medal winning a total of 10 games in four days, with a center who fractured her wrist prior to the Games and coming out of the loser’s bracket to defeat their nemesis, the Michigan Spirits twice.  Their last four games were played within a span of seven hours on Friday, June 21

Undefeated in four games of pool play to achieve the top seed of the eight team championship bracket, the Bouncers lost their second game of bracket play to the San Diego Sun, a team they beat in pool play by 18 points.  The Bouncers won their next three elimination games, including a win over the San Diego Sun, by 23 points to set up the final with the Michigan Spirits.

“They have a really tall center, named ‘Big Edna,’ who scores every time she gets the ball,” said Bouncers team member Julie Bradley. “We got a tall player from one of the other teams from The Villages to simulate her in our practices.

“The strategy worked as the Bouncers defeated the Spirits by identical scores of 23-19 in the final two games of bracket play.

“We were behind in both games and came back to win,” Bradley said. “We double-teamed ‘Big Edna’ and that was the key.  We kept her from getting the ball and from scoring.  Needless to say, we were ecstatic.”

Florida Table Tennis players swept the top three medals in the Men’s Doubles 55-59 age group.  Garth Jordan, of Tampa and Winston Dowridge, of Jacksonville won the gold medal while Ricardo Abril, of Orlando teamed with an out-of-state partner Dennis Lee, for the silver.  Dwight Newton, of Melbourne, teamed with William Lee, from Orlando for the bronze medal.

A listing of Florida medal winners follows.  If any omissions are found, please send an email to Nick Gandy at media@flasports.com to be added to the list.