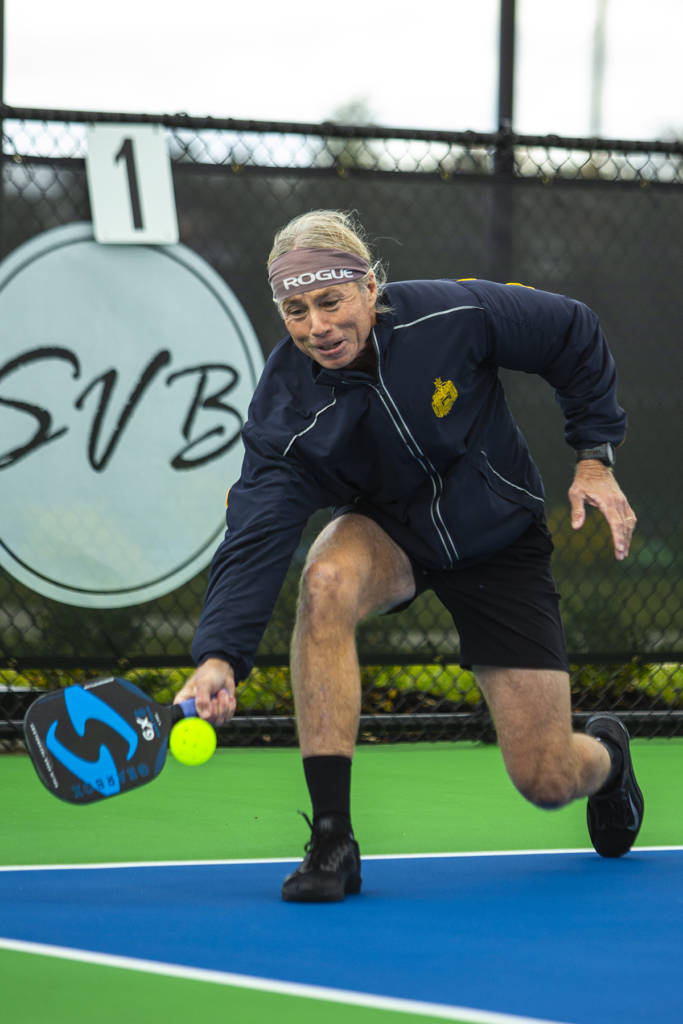 WESLEY CHAPEL – Overnight and early morning rain caused delays in the start of the first of five days of Pickleball and the third of six days of Tennis on Monday at the 2020 Florida Senior Games.

Once the front that moved in from the Gulf of Mexico producing the rain cleared through, blue skies, but chilly temperatures welcomed athletes to the Pickleball Courts at the Sarah Vande Berg Tennis and Wellness Center in Zephyrhills and the Innisbrook Tennis Club in Palm Harbor.

The first day of Pickleball featuring Men’s and Women’s Singles was pushed back to 2:00 p.m. with brackets playing into the evening.  One of the early starts came in the Men’s 60-64 age group, which featured 15 entries, the largest of 14 age groups played.

The championship match came down to a rematch of an earlier meeting between F.D. Wilder, of Naples (pictured at right), and Owen Mitchell, of Eustis, the gold medal winner of the age group in 2019.  Wilder won the first match, in three games, 11-3, 4-11, 11-3, dropping Mitchell into the consolation bracket.  He then proceeded to win five consecutive matches to advance to the final against Wilder, who had won two matches to advance to the championship.

Gabriel Wong, of Ponte Vedra Beach, won his fourth consecutive gold medal in the Men’s Singles 70-74 age group.  Wong won four matches in straight sets defeating Martin Fleischman, of Tampa, in the finals by a score of 11-8, 11-3.  It was his second gold medal in as many days as he won the Men’s Singles Tennis gold medal on Sunday, in the 70-74 age group, for the third time in four years.  Wong defeated Robert Schmidt, of The Woodlands, Texas, 6-3, 6-2 in the finals.

Wendy Tyree, of The Villages, was the lone Table Tennis player to win gold medals in all three events at the Legacy Park Multipurpose Center in Alachua.  Tyree won the 60-64 age group Women’s Singles gold medal, teamed with fellow residents of The Villages, Yulia Wilson, for the 55-59 age group Women’s Doubles gold and rounded out the trifecta in the 60-64 Mixed Doubles with Gordon Weinblatt.

It was the first Women’s Singles gold medal for Tyree, who teamed with Deb Curtis to win the Women’s Doubles 60-64 age group medal in 2019.

Table Tennis continues Tuesday at the Legacy Park Multipurpose Center with the 70-74 age groups and up.

In one bracket that produced medal winners on Monday, the Men’s 65-69 age group, Lloyd Mitchell, of Miami Springs, and Ted Abernathy, of Fort Lauderdale, won their second consecutive championship.  The duo defeated Earl Claypool and Al Smith, 7-5, 6-1 in the final. Mitchell and Abernathy were the gold medal winners in the 60-64 age group at the 2019 Games.