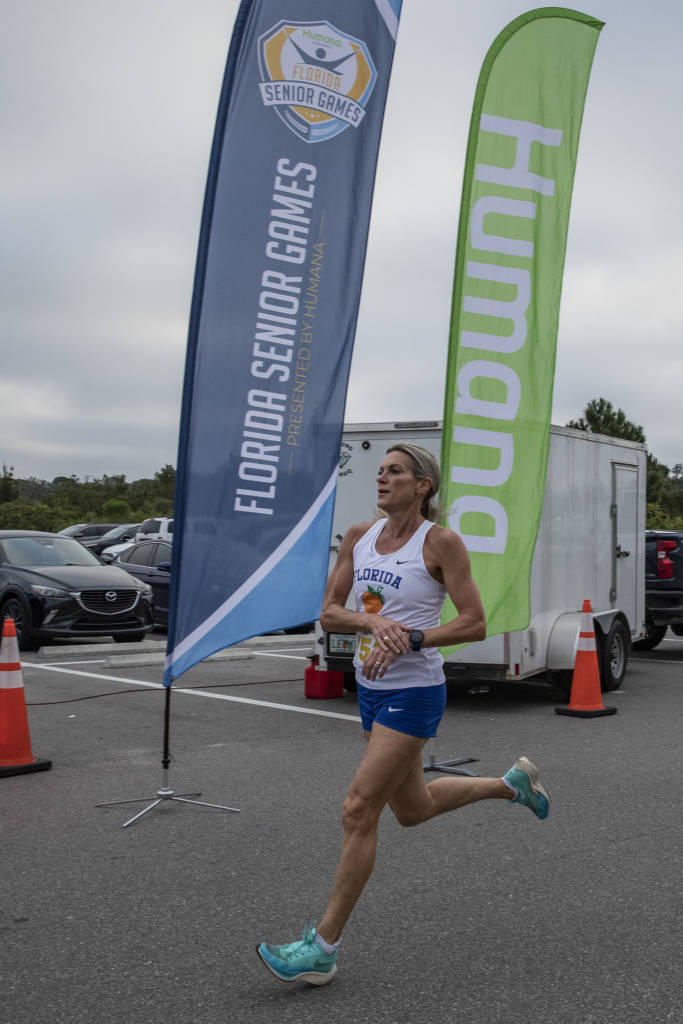 Day 8 of 9 of the 2022 Florida Senior Games, presented by Humana, provided a flurry of activity with action in nine sports on Saturday in Florida’s Sports Coast.

The day began with the start of the 5K Road Race, Power Walk and Race Walk at the Wiregrass Ranch Sports Campus of Wesley Chapel. Salvatore Camacho, from Jacksonville, was the top overall finisher of the 2022 Florida Senior Games 5K Road Race, crossing the finish line in 18:23.03 for the 50-54 age group gold medal. He was 29 seconds faster than the overall second place finisher, Alan Wells, of Orlando, who won the gold medal in the 55-59 age group.

“He really pushed me,” Camacho said after the race of Well’s performance. “He was right there with me until the very end.”

Eight age group records were broken in the Field Events day of the Track and Field Championships at Cypress Creek High School. While no jumps records were broken, one discus record, five javelin and one shot put record was shattered.

The most impressive record-breaking performance came from Esse Sattari, of Hahira, Georgia, in the Men’s Javelin Throw, 85-89 age group. Sattari’s throw of 92 feet broke the previous record by over 31 feet, set in 1994, by Otto Scherini, of Lecanto.

Establishing an age group record in the Women’s 90-94 age group Javelin Throw was Dorothy Rheinhardt, of The Villages, with a throw of 16 feet, 6 inches. After becoming the first female 90-year old javelin thrower in the history of the Florida Senior Games, Rheinhardt also threw the discus and shot put.

Carol Helfer, of The Villages, won her sixth overall Women’s Singles gold medal, dating back to 2007, taking the gold medal in the 75-79 age group at the Zephyrhills Shuffleboard Club. Helfer began her Florida Senior Games Shuffleboard career with back-to-back gold medals in 2007 and 2008 in the 60-64 age group.

Eddie Anderson, of Lakeland, and Graham Littlehales, from Lake Wales, advanced through the most populated Men’s Doubles Bracket, of 15 teams, Saturday at the Sarah Vande Berg Tennis and Wellness Center. After dropping their third match, Anderson and Littlehales battled through the consolation bracket and defeated John Mansfield, of Vestal, NY, and Mark Petty, of The Villages twice, in the final round, for the championship.

Can You Dig It, from Huntington Beach, CA, won four matches to win the six-team Women’s 50-54 age group gold medal at the Wiregrass Ranch Sports Campus. Can You Dig It won two pool play matches and two in bracket play including a win against High Maintenance, of Miamisburg, OH, in the championship match 25-23 and 25-22. A total of 15 teams were on the courts today through the 70+ age group, which was won by the Vintage Volleys team, from The Villages.

The final day of the 2022 Florida Senior Games, presented by Humana, is Sunday with seven sports, including the only day of Powerlifting, to be held at the Land O’ Lakes Recreation Center.