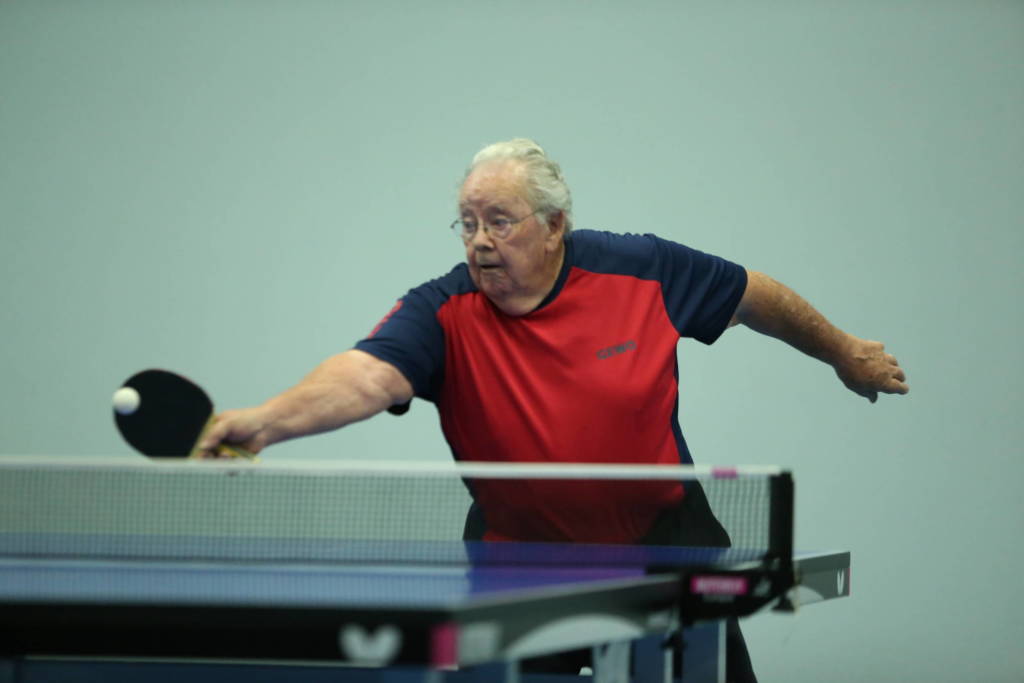 He began winning medals in 1993, the second year of the Games, in the 55-59 age group. He claims to have won a medal in the inaugural Games, but there are no records from that year.

In the 2021 Games, he won medals in the 85-89 age group and was recognized with a Lifetime Achievement Award, for competing in the Florida Senior Games in all four of its decades.

“I’m not a regular,” Shultz said. “I’ve played a half-dozen times in the National Games. The last time was in Pittsburgh (2005),” Shultz said. He was a fifth place finisher in Men’s Singles in the 65-69 age group.

However, his impressive accomplishments have come in Men’s Singles and Doubles. Of the 28 gold medals, only one has come in Mixed Doubles.

“We decided to play together in the National Senior Games in December at the Florida Senior Games,” Shultz said. “We’ve played together one time before and she decided I was good enough to play with her.”

Faria has been busy at the 2022 National Senior Games winning a gold medal in the 85-89 age group in the 1500 Meter Power Walk and a silver medal in the 5K Power Walk. She was a seventh-place finisher in the shot put. Besides teaming with Shultz, she will play Women’s Singles and team with Jane Pang, from Clermont, in the 80-84 age group.

While Shultz has a very competitive spirit, he and Faria have quite different personalities. Shultz is friendly, but not too vociferous. Faria is the life of the party. At the 5K Road Race, she wore a t-shirt that read, Perfect 10.” At the Celebration of Athletes, she was an enthusiastic participant in the pre-celebration dance party.

No matter the differences in personality, Shultz and Faria are talented table tennis players in the 85-89 age group. Who knows, if the two of them end up with mixed doubles gold medals, an impromptu dance party will break out in the Broward County Convention Center.