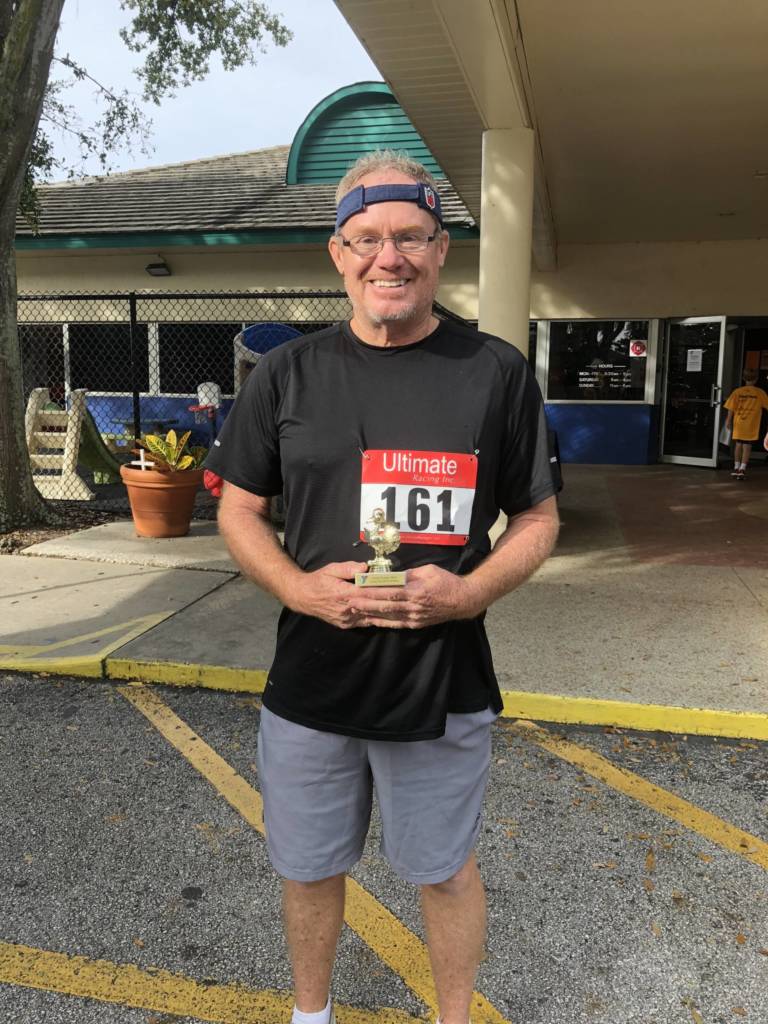 TALLAHASSEE – It’s all about the training for Florida Senior Games athlete Gary Perigo.  The actual competition is just a benefit from the training.

When he’s not training and competing himself, he’s creating opportunities for others to train and compete in the Lake Senior Games, a Florida Senior Games Local Series Qualifier.

In each of the sports Perigo has entered, over the last 10 years, in the Florida Senior Games, he has improved with his training.  He can also claim the same kind of success as the Director of the Lake Senior Games, as participation has increased fivefold over the last six years.

“I love to train and love to compete,” Perigo said.  “It’s a way for me to relax and get away from the stresses of life.  I don’t let bad shots on the golf course or on the archery range bother me. I just move on to the next shot.”

Perigo’s first entry into the Florida Senior Games came in 2010 on the golf course.  He played golf for four years (2010-13) lowering his score from a 91 to a 78 over that time.  At the 2013 Florida Senior Games, he won a silver medal in the 55-59 age group, coming in second to multiple medal winning golfer, on a state and national level, Broward Sapp.

“He beat me by two strokes,” Perigo said.

The medal-winning performance must have inspired him to bring the Senior Games to his home county.   The motivation was so strong that after being turned down for funding by local officials, he formed a corporation and The Lake Senior Games debuted in April of 2014.

“I lived in Seminole County and had played in the Golden Age Games in Sanford,” he said. “The Games needed to be represented in Lake County.”

Now as an administrator and athlete, Perigo started in Archery competition in 2014. His first time pulling back the Barebow Compound bow resulted in a score of 377.  With practice and training, he upped his score to a 523 in 2016 to qualify for the 2017 National Senior Games, where he won a gold medal.

“I took up Archery because the Lake Senior Games coordinator needed some assistance,” he said.  “I thought to myself, anyone can shoot a bow.”

But as any accomplished archer will tell you, it takes more than just lining up in front of a target.  Perigo’s increased score was a result of lessons and more training.  Through that training, he learned the fundamentals of the sport so well, he has advanced to an instructor.

Besides his better scores and medal winning performances as an athlete over the years, the Lake Senior Games have continued to grow.

Over six years, since 2014, the Lake Senior Games have grown from just 70 athletes competing in seven sports to more than 350 competing in 10 sports.

On top of those accomplishments, Perigo’s love of training and competition has also increased his well-being and he lost 65 pounds over the last three years.  His resting heart rate, once at over 70 beats per minute, has decreased into the 40s and his blood pressure has dropped from 170/90 to 124/80.

“Training is fun,” says Perigo. “Living healthy is fun. I can run distances now and not get winded.  I won third place in my age group at a 5K recently.  My body forgot how to run.”

His on the field and in the gym efforts have led to the growth of the Lake Senior Games.  At events and while working out, Perigo never passes up the opportunity to spread the word of the Senior Games program.

“I’m training not just to be healthy but because I’m in the Senior Games,” he tells others.  “The Senior Games allow people to be introduced to a program to do something they did when they were younger.”

Now catching up to a bucket list item from his own youth, Perigo has taken up pole vaulting and sought the assistance of a Florida Senior Games pole vaulting legend, Joe Johnston, of Apopka.

Johnston has a long list of proteges that have ventured into the “Joe Dome,” a pole vaulting training facility he has constructed on his property in Central Florida.

“Once you know Gary, you realize his bucket list is pretty long,” Johnston said. “He shows up the first time weighing 260 pounds and I said, ‘We’ve got a challenge, but let’s go.’ He’s very strong and the weight loss has allowed him to improve his technique and learn a more efficient way to pole vault.  He lives for it.  He’s a very interesting guy who’s into a lot of stuff.”

In a first for Florida Senior Games Local Series Qualifiers, the Lake Senior Games will have a Sprint Triathlon in 2020 with a 400 meter swim in open water, a 20K Cycling Road Race and conclude with a 5K Road Race.

“Clermont has cleanest lakes in the state for the open water swim, and hills and countryside for the biking and running,” he says.  “The Great Floridian Triathlon has been going on for nearly 30 years.”

It’s Perigo’s goal to put on good events for folks not only to have fun and compete but to find a new way of life around like-minded people.

“I’m doing something to help others out,” he says. “It’s about the community, getting people together and enjoying the lifestyle.”

Due to Gary Perigo’s efforts, the Lake County community is coming together and enjoying the lifestyle.