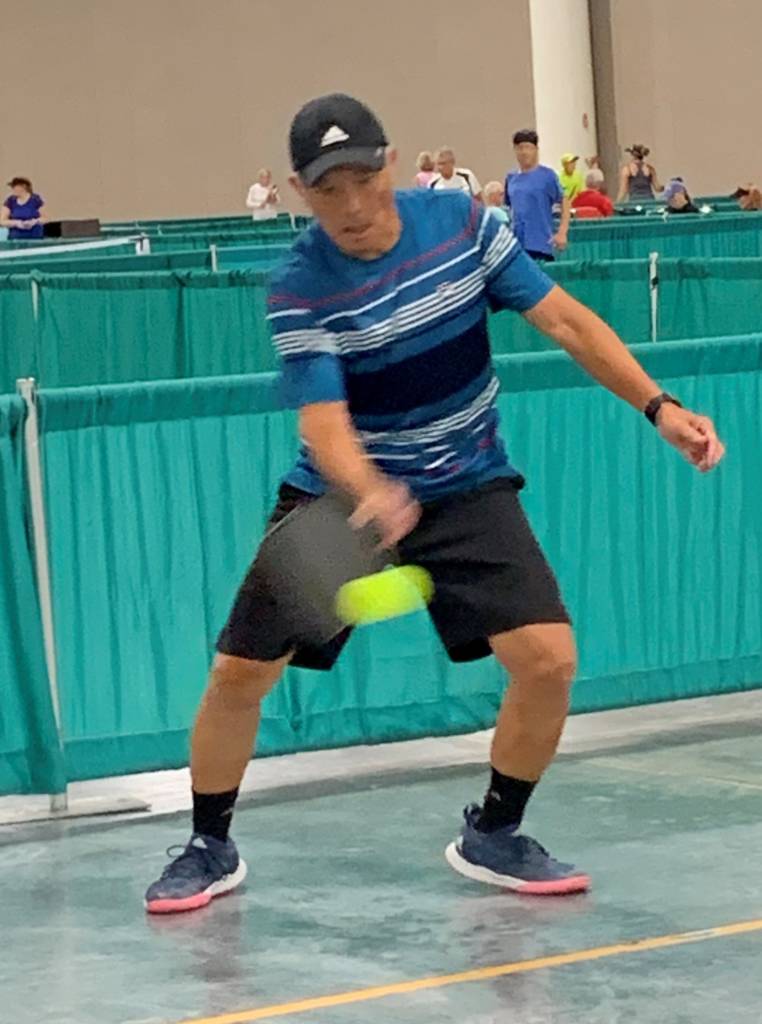 On a day when 42 Pickleball courts were in action at the Greater Fort Lauderdale Broward County Convention Center were in action from 8:00 a.m. to 8:00 p.m., several Florida athletes were among the last playing for gold medals.

Gabriel Wong, of Ponte Vedra Beach emerged with a gold medal winning the Men’s Singles 75-79 age group, after a come-from-behind win in the semifinal match.

Wong trailed Ken Willingham, of Dallas, Texas, 14-10 and scored the next six points for the win, 16-14. Dillingham won a consolation bracket match against John Lightbody, for a return match against Wong.

The two split the first two games with Wong winning the first 11-9. Willingham took the second game, 11-5 and Wong won the final game 11-5. Wong held a 7-4 lead and outscored Dillingham 4-1 to the final, serving out the last two points with a 9-5 lead.

While it was the first matchup between the two on the Pickleball courts, Wong and Dillingham were regular opponents on the tennis courts in Texas.

“We’ve played tennis against each other many, many times,” said Wong, who lived in Dallas from 1998-2014. “He completely gave up tennis and now plays only pickleball.”

Wong, the 2020 Florida Senior Games Male Athlete of the Year, won two tennis matches earlier in the week before retiring in a match on Friday, after the first set, to get in some pickleball practice at the Convention Center. He won the first match against the second-seeded opponent, 6-4 and retired for the loss.

“I’ve never felt so good about a loss before,” he said.

Also winning Women’ Singles Pickleball gold medals on Saturday was Jean Kiker and Deb Harrison, both of The Villages. Kiker’s gold came in the 85-89 age group and Harrison won the 75-79 age group. It marked their third gold medal in as many days, as both won gold medals in Women’s and Mixed Doubles on Thursday and Friday.

When asked how that was accomplished, Kenyon answered with a shrug, “We play a lot.” He continued with, “We’ve learned how to read the drifting of the courts. If you’re not used to that, it’s tough. These are also faster courts.”

Hodges and Kenyon, the 2019 National Senior Games Open Doubles gold medalists in the 60-64 age group, play one more pool play match Sunday morning and with their Saturday success are almost guaranteed a spot in the eight-team championship bracket.

As the returning gold medalists, all eyes are on the Florida team. Hodges claims there’s no pressure for them to repeat.

“Personally, I did want to win the gold medal in Albuquerque,” he said. “We came this time for fun. What happens, happens and it’s ok.”

At the Track and Field competition, Madelaine “Tiny” Cazel, of The Villages, set a new all-time best mark in the Women’s Discus Throw in the 85-89 age group with a throw of 58 feet, 1 inch. It topped the previous mark by almost seven feet. Cazel also holds the Discus Throw record in the 80-84 age group and has posted top 10 times in the 65-69, 70-74 and 75-79 age groups, going back to the 2005 National Senior Games.

Andrea Collins and Sonder Hawkins, both of Orlando, repeated their top two finishes from the 50 meter dash 55-59 age group to the 100 meter dash Collins ran the race in 13.40 for the gold and Hawkins finished with a time of 13.77

The swimming competition at Plantation Central Park, featured Florida athletes finishing in the top three of the 100 yard Individual Medley. Marc Middleton, of Orlando and host of Growing Bolder, won gold, while Hubie Kerns,of Fort Lauderdale, took the silver and Sarasota’s Rudy Vazmina was the bronze medal winner. Middleton also won the 50 yard freestyle gold with a time of 25.04 to establish a new all-time best mark in the age group.

Linda Fulton, of Celebration, won her second and third gold medals of the Games, winning the Women’s 200 yard backstroke 70-74 age group and the 50 yard freestyle.

The 2022 National Senior Games continue in the Greater Fort Lauderdale Area through May 23. For daily updates, visit www.nsga.com/2022Daily.