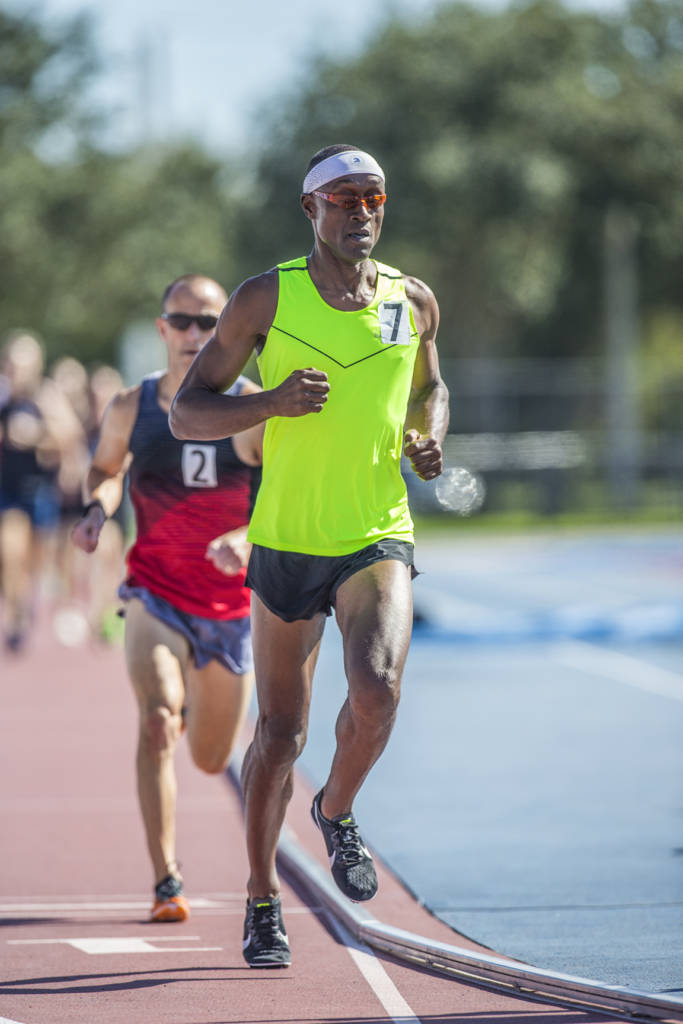 TALLAHASSEE, Fla. – For Florida Senior Games athletes taking their marks at the starting line with Alan Wells, get a good look at his face.

Why?  Because runners will be looking at his back or seeing him off in the distance as they circle the track for the remainder of the race.

Wells turned in record setting performances at the 2019 Florida Senior Games after surgery on his right knee a few months earlier.

Even with all of the accolades on a state and national level, his string of unbeaten performances in the literally almost came crashing down at Miramar’s Ansin Sports Complex in the 1500-meter run.

While heading toward the finish line, for his record-setting time, Wells clipped the railing with his left foot and nearly stumbled.  He was able to recover and posted a time of 4:53.60, more than five seconds better than the previous record, set in 1994.

“I was so focused on the finish line and looking at the clock to see where I was in breaking the record, I hit the railing,” Wells said after the race. “Wearing the metal spike, you usually slip on the metal rail.  I was lucky I didn’t fall.”

Wells has represented Florida well on a National level also and is looking forward to running in the National Senior Games in his home state in 2021.

Before his successes in the 800- and 1500-meter races, Wells was a 5K Specialist for 20 years who earned U.S. Masters All-American status for seven consecutive years between 2007-13. During that time, he consistently posted times in the 16-minute range, even dipping down to 15-minute marks.

From his first 5K through New York City’s Central Park in his early 30s, all of the pounding of the pavement toward the finish line led to the knee surgery.

“Roads are tough on your legs,” said Wells. “I trained very hard to be able to run as fast as I did to compete at that level.  It took a toll on my knees over the years.”

Born in London, England, Wells moved to the Caribbean Islands at eight years old.  He came to the United States to attend New York University, in New York City, where he received a bachelor’s degree in Economics.  He returned to England and earned a Master’s Degree in Business Administration from U.S. International University in London.

Professionally, Wells worked as a bank manager in New York City for the likes of Chase Bank, Bank of America and TD Bank.  Having relocated to Orlando, he now works as an analyst for over a dozen banks, including Wells Fargo and Truist (formerly SunTrust).

Like the 5K Road Races that led him to shorter distances, life as a bank manager and living in Manhattan took a toll and he moved to Florida to slow down and be closer to family.

“It was exciting when you’re younger. But it wears you out when you get older. You need to breath and enjoy life,” said Wells.

When Wells is not traveling to visit family in Florida, he travels around the country for work and track meets. He was hoping to compete in the recently canceled World Masters Games in Toronto.  His future plans include competing in National Masters Mile in August as a member of the Atlanta Track Club.

To prepare for these meets and upcoming Senior Games competitions, he trains on his own on tracks near his Orlando home at Faith Christian Academy and Liberty Middle School five days a week.

Training for the long distance runs takes a variety of methods to achieve the success of Wells and other gold medal winners, according to fellow Florida Senior Games runner in the 50s age groups, Paul Hodge, of Tallahassee.

“More speed work is needed for the 800 and 1500, than in 5Ks,” said Hodge, a gold medal winner in the 2018 Florida Senior Games in the 5K Road Race and 1500-meter run, which did not include Wells. “For the long distances you need to put in miles and speed work. At our age, recovery time is also huge between days and runs.”

Running One Mile races is another specialty of Wells, earning All-America status in that event as well.

While living in New York City, he ran in the New York Road Runners Fifth Avenue Mile and placing first in the 50-54 age group in 2013 with a time of 4:33.  The road race literally runs down Fifth Avenue from north to south with internationally known runners competing.

“It starts up in the 80s block and came down to the 60s.” Wells said. “There were people cheering on both sides of the street.”

Whether its running on the street or on the track, more times than not, Alan Wells has a clear path to victory.