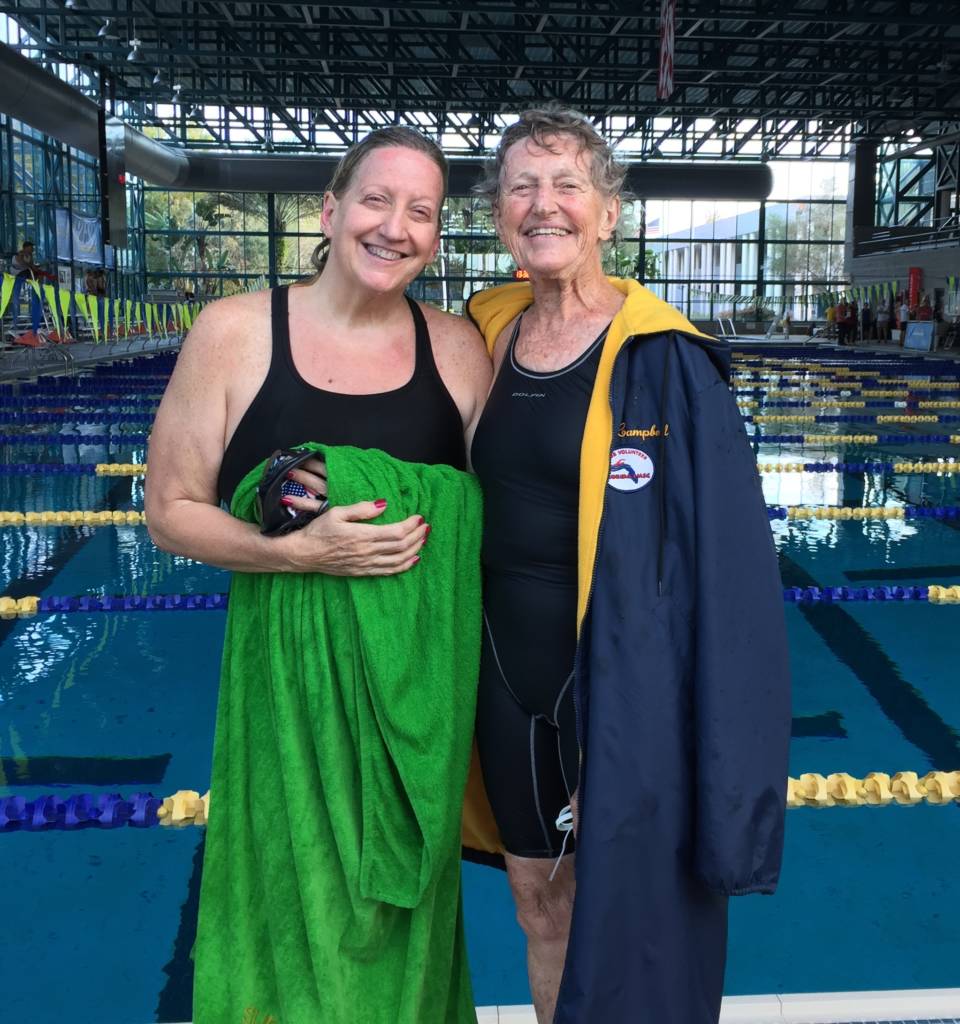 Joan Campbell, a swimmer from Palm Harbor, has been competing in the National Senior Games since 1989 when the Games were held in St. Louis, Missouri.  She placed in the top six in four events and won a bronze medal in the 50-meter breaststroke, as a resident of Connecticut, in the 55-59 age group.  She will swim in five events in the 85-89 age group in Albuquerque, the 200- and 500-yard freestyle, the 200- and 400-yard IM and the 200-yard backstroke.

“I was in the second National Senior Games in St. Louis,” Campbell said.  “I swam for several years when it was long course. Then it became short course. As a distance swimmer, I didn’t like that.”

“It has something to do with fast twitch muscles,” she said.  “When I do the 100 free, it takes me 50 yards just to get going.  As the number of meters or yards gets lower, my result gets higher.  I’ll swim in the 500-yard freestyle at the National Senior Games but will probably not do that well.”

Florida swimmers usually excel at the National Senior Games and won a total of 116 medals at the 2017 Games in Birmingham.  Campbell credits the success to the Florida weather.

“The weather is good for swimming, especially now,” she said.  “It’s 95 degrees outside, who wants to run? My kids all began swimming like that.  They didn’t want to be out in the heat catching balls. They wanted to be in the pool.  To me, that’s common sense.”

Campbell has teamed with Patricia Tullman, a swimmer from Tampa, on relay teams over the years.  Tullman made her first appearance at the 1993 National Senior Games in Baton Rouge, LA, as a resident of New Jersey.  She will swim in six events at the 2019 National Senior Games and holds five Florida Senior Games records in the 75-79 and 80-84 age groups.

Tullman’s extensive record in the National Senior Games includes 20 medals, including 10 gold medals, and Top Ten Overall Times in the 50- and 100-yard Butterfly and 50-yard freestyle events in the 75-79 age group in 2015.

Largo’s Ethel Lehmann will compete with the Freedom Spirit 75+ Softball team at the 2019 National Games but has been competing in the National Senior Games since 1991 when she had a fifth-place finish in the 1500-meter run in the 55-59 age group.  Lehman was one of 155 athletes to represent Florida the 1991 Games in Syracuse, N.Y. She is now among 687 Florida athletes competing in the 2019 Games.

Over the years, Lehmann has competed in both sports at the State and National level.  Lehmann, who will turn 90 on November 24, will take the field at shortstop for the Freedom Spirit Team in Albuquerque.  Besides her play on women’s teams, she also competes for the Kids and Kubs 75+ Softball team, for men and women, of St. Petersburg, playing second base.

Lehmann admits she can’t hit the ball as far as she used to but has learned another strategy to reach base. “I have to look for spots where the other team isn’t,” she said.  “I’ve got to find spaces.”

To acclimate for the 5,300 feet above sea level altitude of Albuquerque, Lehmann has spent time leading up to the 2019 National Senior Games on Red Kill Ridge, in the Catskills Mountains, at an altitude of 3,100 feet.  She has been spending summers in the New York mountains for many years.

Kamal Chaudhari, a badminton player from Temple Terrace, began playing at the age of 16 and has been sending the shuttlecocks over the net on at the National Games since 1999.  He has registered to play in all three events, Men’s Singles and Doubles and Mixed Doubles in the 80-84 age group in Albuquerque.

Now that he’s playing in the 80-84 age group, Chaudhari realizes he needs to make some changes in his game to accommodate his age group.  He now calls himself “a placer.”  Meaning that he needs to place the shuttlecock where his opponent is not.  Much like Ethel Lehmann on the softball field.

“I have started practicing more seriously knowing that I have to compete against some tough opponents at the National Senior Games,” he said.  “It’s very good that the Senior Games allows better matched competition in five-year age groups.  At the older ages, we start losing some of the abilities than we were younger.  In other tournaments, I may have to play someone in their 70s and that’s not fair.”

Chaudhari will be among 10 competitors in the men’s singles 80-84 age group bracket.

When the 2021 National Senior Games come to Fort Lauderdale, hopefully these four athletes will be registering for their fourth and fifth decades of competition.