The Tiny Cazel Farewell Tour at the 2022 National Senior Games 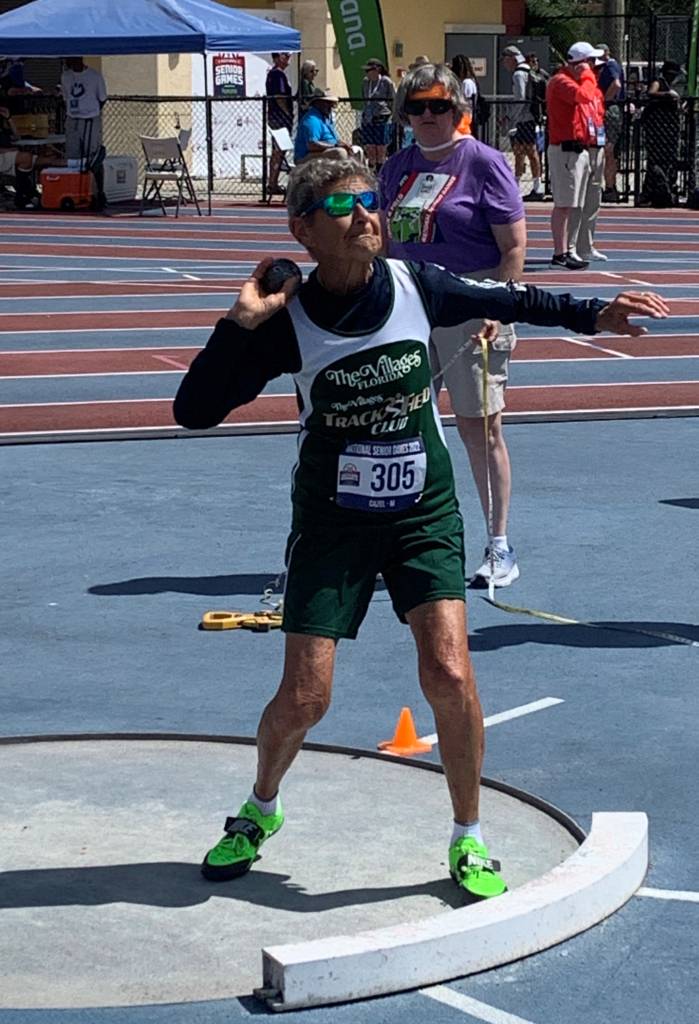 The Tiny Cazel Farewell Tour at the 2022 National Senior Games

When superstar athletes call it quits, there’s usually a farewell tour before the end comes.

The 2022 National Senior Games, presented by Humana, was a farewell tour for Madeline “Tiny” Cazel, a tribute to 20 years of excellence in Senior Games all over Florida and the U.S.. At the 2021 Florida Senior Games, she began informing fellow athletes and friends those Games would be her last.

“I don’t want to train like I have been any longer,” Cazel said. “I just want to play sports for fun. Play some golf and bowl.”

She turned in qualifying performances last December and began her training for the 2022 National Games. Tiny takes her Senior Games competitions seriously. She sets goals for herself and many of those goals include setting state and national age group records.

She now holds seven total records in the discus, javelin and long jump from the 70-74 age group through the 85-89 age groups.

“I can’t pick up the box of medals I have in the closet any longer,” she said.

On hand for her 2022 National Senior Games performances were six members of her family. Her son, Scott and daughter Cathy O’Shea, along with her husband, Dan, were on hand at the track to see her set the 85-89 Shot Put record. Also on hand were grandchildren, Sean and Kylie O’Shea. Jesse Bruening, Kylie’s fiancé, also joined the farewell tour.

Another chapter in her farewell tour included leading the athletes at the Celebration of Athletes in reciting the Athletes Oath.

The oath typifies Cazel’s outlook in her performances. She is humble in victory and gracious in defeat. She is a proud Senior Games athlete, who is respected by athletes she encounters in competitions all over the country.

“I’m passing the torch to them now,” she said.

Even though Tiny is calling it quits, her family tree will carry on her athletic success. Her children, Cathy and Scott were both gymnasts, who earned college scholarships.

“She spent many hours following my brother and I around to gymnastics competitions when we were growing up,” Cathy said. “Now we’re following her around.”

Scott’s sons are talented athletes as well. Tristan plays Division II Baseball at Biola University in Los Angeles, while Brennan is a high school hockey player in their hometown of Chicago. They were unable to attend due to team commitments.

Cathy’s daughter Kylie was on the cheerleading squad at Ball State University and her son, Sean, took a break from his duties as a F-15 fighter pilot in the U.S. Air Force in Boise, Idaho, to join the family.

As a resident of The Villages, Cazel will find plenty of time to improve her golf game at the many courses within the Central Florida community. Her post-Senior Games competitive spirit is already beginning to show.

“She has a putting green in her backyard,” said fellow resident, and aspiring Senior Ghe ames athlete, from The Villages, Jeanette “Jay” Nemoda.

Cazel admits her athletic career, as she now knows it, is not completely over.

“I’m still going to play softball for the Golden Gals 75+ team,” she said.

The well-deserved farewell tour is still in effect for the Track and Field portion of Madeline “Tiny” Cazel’s career.