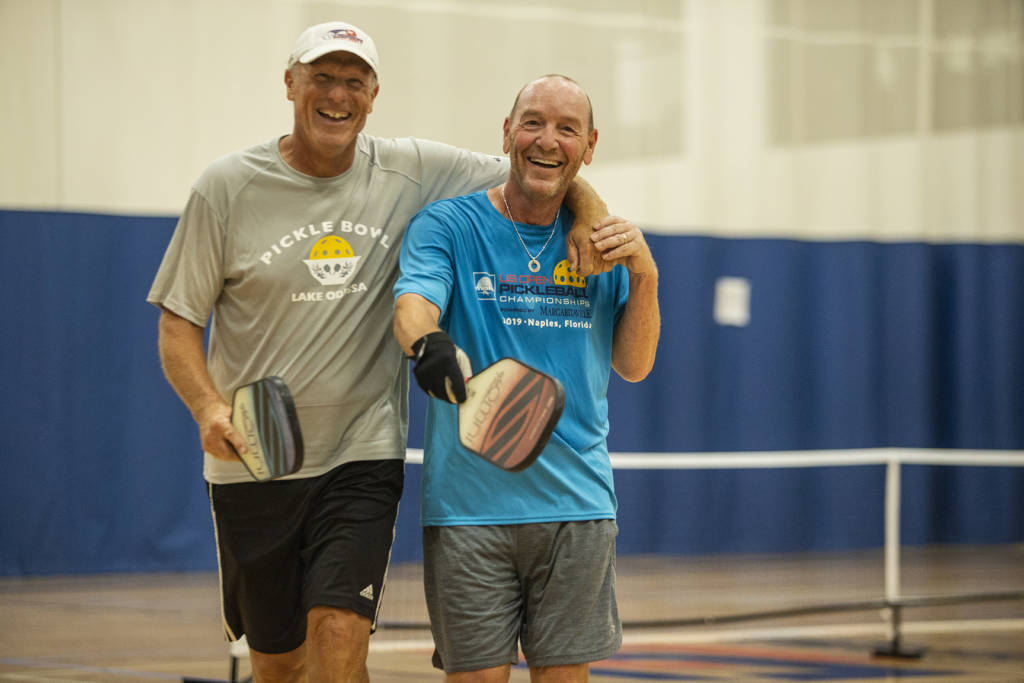 FORT LAUDERDALE, Fla. – What started out as a torrential down pour early Thursday morning, at the 2019 Florida Senior Games presented by Humana, shifted to a clear, sunny finish in the afternoon. While the opening rounds of the men’s and women’s doubles championships at Tennis were canceled with flooded courts and soggy conditions, the 36-hole golf championship concluded as the first day of pickleball took place indoors at the DS SportPlex in Deerfield Beach.

Despite the not so favorable conditions at the Jacaranda Golf Course, after off and on rain from Wednesday afternoon through Thursday morning, Florida Senior Games golfers were still able to post scores to set 36-hole records.

Nick Kent, of The Villages, had the lowest overall 36-hole score with a 157, to set the 75-79 age group record and win the gold medal.  He finished six strokes ahead of the silver medalist, Peter Konowicz, of Valrico, and topped the previous record by two strokes.  Kent also holds the 70-74 age group record in 36-hole competition.

Due to the weather, the shotgun start time was pushed back 30 minutes.  As the golfers progressed on the course, the weather cleared up as did Kent’s second round, en route to an 18-hole score of 79.  He finished Wednesday’s round with a 78.

“I was five over par on the first nine holes and then the weather started clearing up,” Kent said.  “With the better weather, I was only two over par on the last nine. I stayed away from the big numbers and didn’t have a score over five on any of the holes.”

Also setting a 36-hole 80-84 age group record was William Jones, Jr., of The Villages, with a two-day score of 161.  He bested his own record score of 163, set in 2016, and was one stroke ahead of the silver medalist, William McCullough, of Nokomis.  Finally, the most experienced golfer in the field, 90-year old Dick Cheney, of Winter Haven, set a new 90-94 age group score with a two-day total of 208.

On the first day of Pickleball at the DS Sports Plex in Men’s Singles and Women’s Doubles events, Bobbi Little, of North Fort Myers, and Diane Bock, of The Villages, won their fifth gold medal in seven years winning the 60-64 age group.  Little and Bock defeated Pat Sargeant and Jodi Yambor, of Tallahassee, 11-4, 11-7 in the championship match.

Day eight of the 10-day competition sees the fourth day of the six-day Tennis championships that carry through Sunday, December 15. Friday will host both men’s and women’s doubles competition while mixed doubles take place Saturday and Sunday.  The Games will then continue with the second day of pickleball and will start billiards, hosting the nine-ball competition.