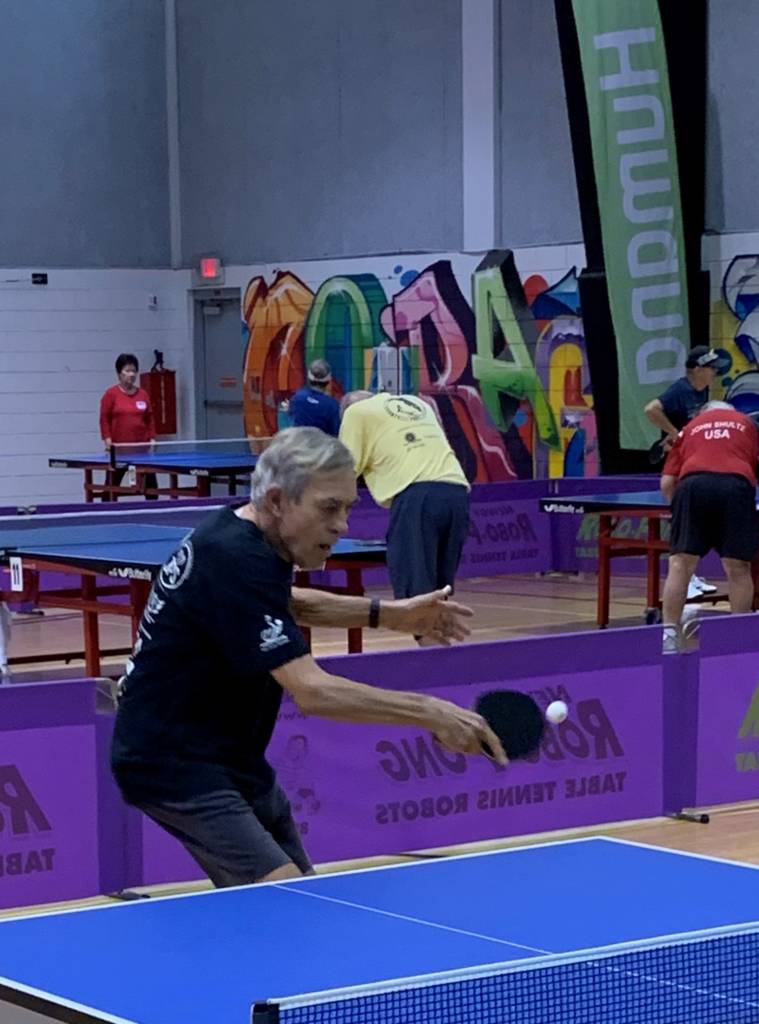 The journey included climbing on a bike and riding nearly 20 miles in San Antonio, batting a shuttlecock back and forth in Miami Gardens and volleying a small white table tennis ball in Lakeland.

The results of the journey?

However, Brabrook’s journey over the last four days is just a sample of his long history of the Altamonte Springs resident’s history in the Florida Senior Games, the National Senior Games and various other state’s Senior Games.

Now 79 years old, Brabrook began competing in the Florida Senior Games in 1999 as a 56-year old, playing table tennis. After breaking his ankle, he was unable to play table tennis and climbed on the bike.

“I’ve never done three sports in the Florida Senior Games,” Brabrook said on his final day of competition at the Simpson Park Community Center in Lakeland, competing in Table Tennis. “It’s great though because as you get older, you need something to look forward to. I wanted to challenge myself to do well in three sports.”

While his athletic performances were admirable and covered quite a few skillsets, it was his determination to spend the 10 hours, driving 690 miles between four Florida cities that should earn him another gold medal.

Brabrook’s final two sports were played inside gymnasiums in Miami Gardens and Lakeland, but it was his first event on the rural roads of Pasco County that is his favorite.

“I like cycling the best,” he said. “It’s the most fun because you can get on the road and have peace and quiet. You’re in a different area of your mind, riding on beautiful country roads. You just get on your bike and go, go, go.”

Tobias, who came to the U.S. from Japan in 1956, won the women’s singles gold medal in the 90-94 age group and teamed with fellow 90-year old, Robert Johnson, of Bradenton, to become the first 90-94 age group mixed doubles team to compete in the Games. She also teamed with Joy Zuckerman, of Ocala, to win the women’s doubles gold medal in the 75-79 age group.

Finally, the legend of John Shultz, of Sarasota, continues to grow. By winning two gold medals and a silver Tuesday at the Simpson Park Community Center, Shultz extended his consecutive years medal-winning streak to 30 years. Shultz won Men’s and Mixed Doubles gold medals and a Men’s Singles silver medal to add another year to the longest consecutive years of medal winning than any other Florida Senior Games athlete. He began the streak in 1993 by winning medals in the 55-59 age group. Today he won medals in the 85-89 age group.

The 2022 Florida Senior Games, presented by Humana, continues on Wednesday with the first day of Mixed Doubles Tennis at the Sarah Vande Berg Tennis and Wellness Center, with matches beginning at 9:30 a.m.

CLICK HERE for a video of the action from the first weekend, December 3-4.

The 31st Annual Florida Senior Games, is a program of the Florida Sports Foundation, the official sports and promotion organization of the State of Florida, presented in conjunction with Florida’s Sports Coast.