2020 Florida Senior Games Athletes of the Year are Multi-Talented 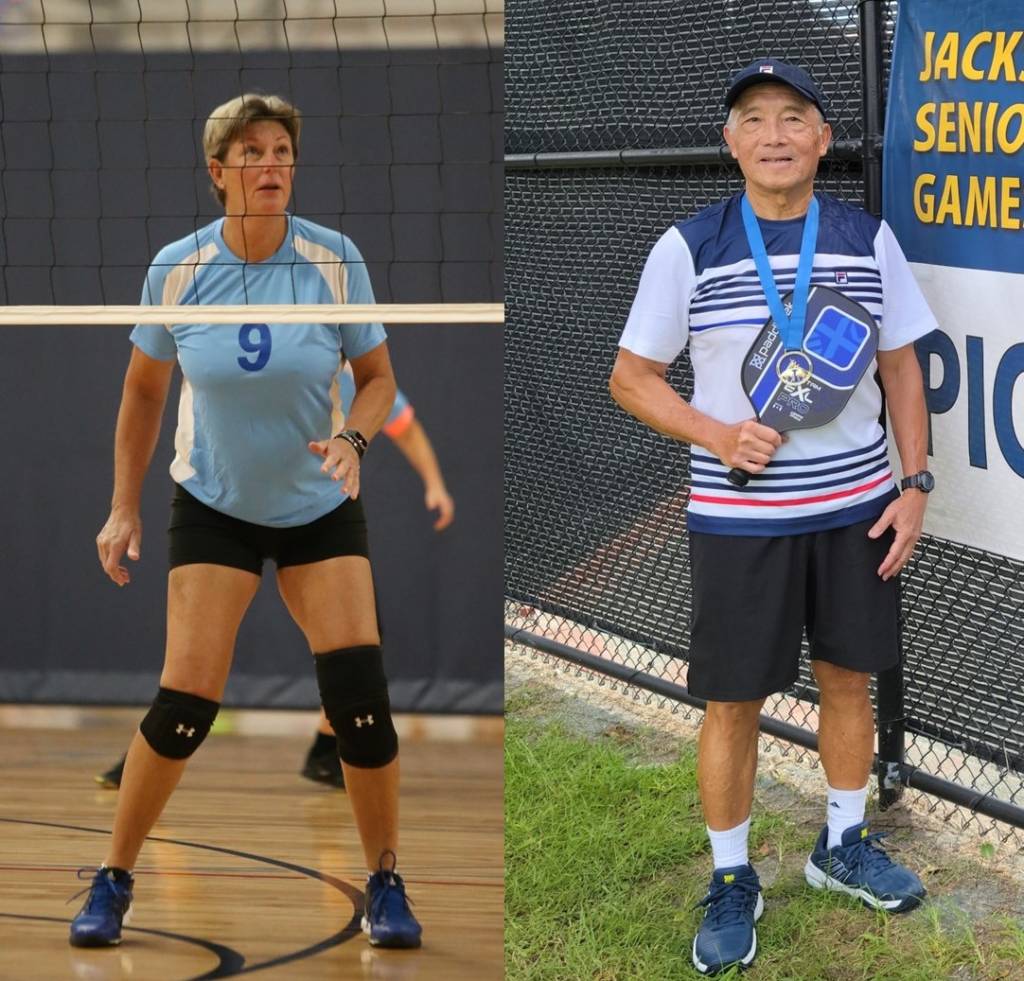 A pair of dual sport athletes earned the 2020 Florida Senior Games Athlete of the Year awards for their performances in two different sports.

Sandra Garner, of Daytona Beach, earned the award for her efforts at the Volleyball net and in field events at the Track. Gabriel Wong, of Ponte Vedra Beach, excelled on the Pickleball and Tennis courts for the honor.

Garner was a gold medalist in 2020 for the Beaches 55+ volleyball team that has been playing in the Florida Senior Games since 2014. At the track, she won a silver medal in the pole vault and a bronze medal in the high jump in the 60-64 age group. A regular on the volleyball court since 2014, Garner began the track and field events in 2018. She was a member of the Beaches team that competed in the 2017 National Senior Games.

Garner’s career in amateur sports goes back to the inaugural Sunshine State Games in 1980, that led to a four-year career for the Memphis Tigers. She was the first member of the Tigers Volleyball team to have her number retired. She was the Head Volleyball Coach at Daytona Beach Mainland High School until 2017 and serves as a line judge at high school and college matches in the Daytona Beach area.

At the 2020 Florida Senior Games, Gabriel Wong wrapped up his three gold-medal winning performance in three days in two sports with a Men’s Doubles gold medal with Gilbert Russe winning the 70-74, on the second day of PIckleball. On the first day, he won his fourth consecutive gold medal in the Men’s Singles 70-74 age group. Wong won four matches in straight sets defeating Martin Fleischman, of Tampa, in the finals by a score of 11-8, 11-3.

The prior day, he won the Men’s Singles Tennis gold medal, in the 70-74 age group, for the third time in four years. Wong defeated Robert Schmidt, of The Woodlands, Texas, 6-3, 6-2 in the finals.

Garner and Wong become the 53rd and 54th Florida Senior Games Athletes of the Year dating back to the 1994 Games. Garner becomes the second Daytona Beach athlete to win the FSG Athlete of the Year, joining Seymour “Sid” Duckman, who earned the honor in 1997. Wong joins Roger Gentilhomme, the 2006 Male Athlete of the Year, as the only two tennis players to earn the award.

The 2020 Florida Senior Games Athletes of the Year will be presented their awards during their competition in Broward County. Wong is registered once again for Pickleball and Tennis and Garner will be playing with the VolleyFrogs team in the 60-64 age group.