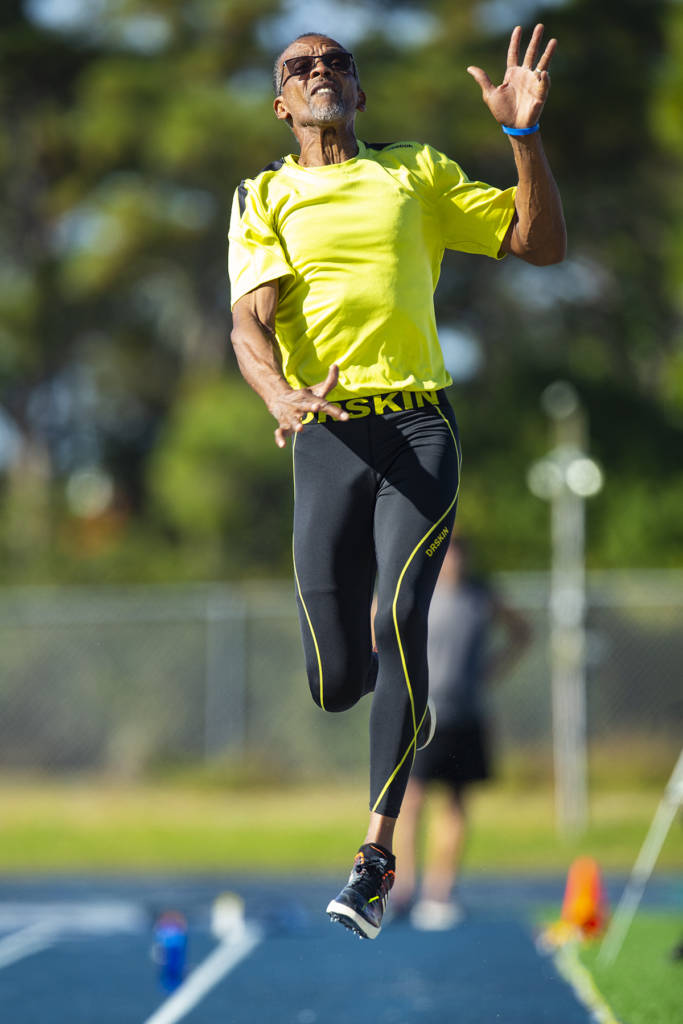 VIERA – The final day of the 2020 Florida Senior Games saw athletes age 50 and over running along the Indian River just after sunrise at the 5K Road Race, flying through the air in jumps events and throwing heavy things and long thin objects in Track and Field events and lifting weights on either side of a bar at the Powerlifting competition.

For a couple of athletes, they managed to do a little bit of just about everything in 30 hours or so from the beginning of the Track and Field events Saturday morning at the Holy Trinity Episcopal Academy until the conclusion of the Games on Sunday afternoon.

Janet Lamoreaux, of Lakeland, began Saturday morning with the 1500 meter race walk and ended on Sunday afternoon pole vaulting.  In between she ran in five events and power walked one, on day one of Track and FIeld, and took a break for food and rest.

She was back at it for a 7:00 a.m. starting gun on Sunday morning, running 3.1 miles, and then made a beeline back to the Holy Trinity Episcopal Academy where she was in the high jump event by 10:00 a.m.

“I love the triple jump but I need more practice,” she said, while watching other triple jump athletes in action. “I’m probably most competitive in the 400 meter run and I’m trying to get better in the 5K.”

He broke is own record in the Long Jump, his favorite of all the events in which he competes.

“At a track meet a while ago, I was doing the high jump and a guy from Mexico asked me if I had ever done the long jump,” Hankerson said. “I told him no, and he said, you should. It combines two attributes you do very well, running and jumping. I took his advice and now it’s my favorite event.”

Another athlete adding his name to a third age group record was javelin thrower, Michael Brown, of Jacksonville.  Brown’s throw of 154 feet, 1 inch set a new mark in the 65-69 age group.  He also holds the 50-54 and 55-59 age group records and in 2004, had the longest javelin throw in the history of the Games, at 226 feet.

The top overall finisher at the 5K Road Race was Glenn Button, of Fort Myers, with a time of 17:43. The top women’s finisher was Amy McCormack, of Sarasota, who crossed the finish line in 22:32. Her time also set a new 65-69 age group record.  It was her second age group record in as many days, as she set a 1500 meter run record on Saturday.

Maria Georgiev, of Longboat Key, set a new record in the 85-89 age group with a time of 34:27, topping the previous record by 16 minutes. Georgiev was the only 85-89 age group athlete to run the race.

The Florida Senior Games 5K Road Race was run in conjunction with the annual Pineapple Man 5K Road Race and Triathlon on the Melbourne Beach barrier island, with runners taking in early morning views along the Indian River.

The Powelifting competition was held at the Renaissance Orlando Airport Hotel with 45 athletes competing. Robert Cseh, of Port St. Lucie, set an American Record for his age group and weight the Bench Press and was awarded the Men’s Best Bench Press Award.  Cseh now competes in the 85-89 age group.

The Florida Senior Games Powerlifting competition is a USA Powerlifting event and 10% of lifters are drug tested including those who set records and win awards.

The 2020 Florida Senior Games was a qualifier for the 2021 National Senior Games, to be held, November 5-19, in the Greater Fort Lauderdale area.