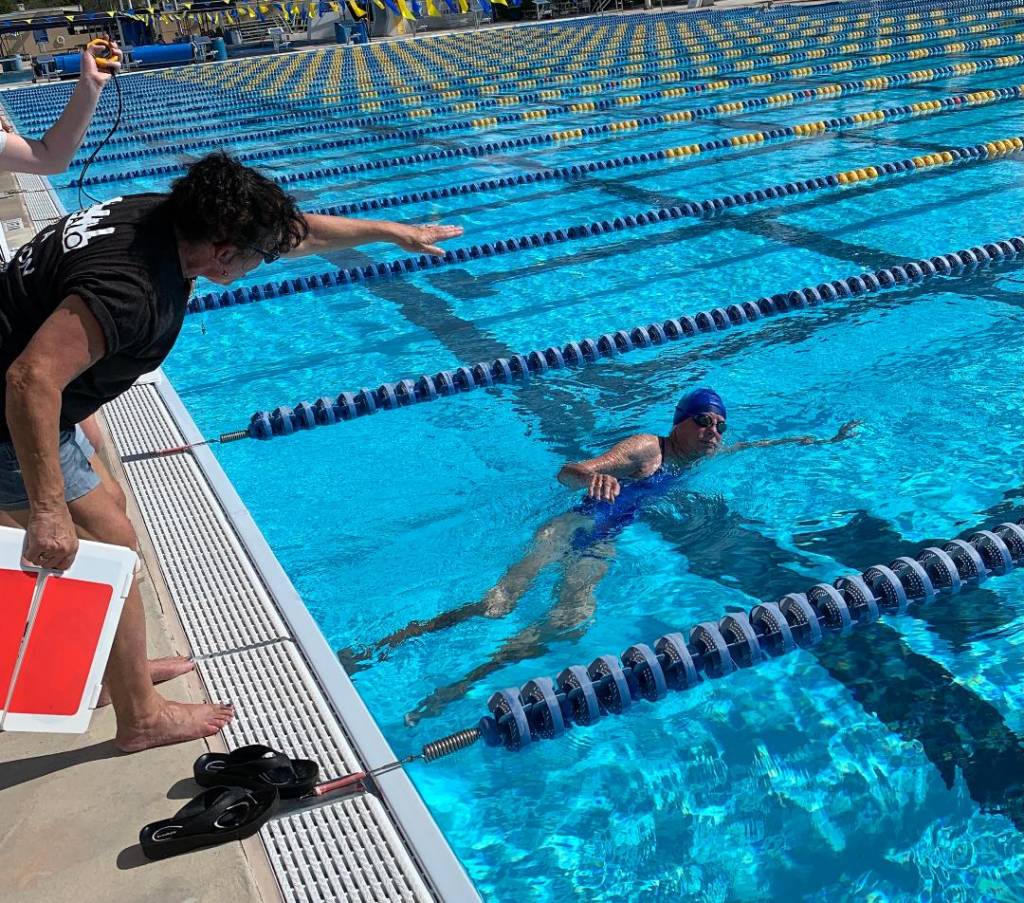 FORT LAUDERDALE – Shirley Chase was so excited to be finished with the 500-yard freestyle swimming event, where she swam 20 laps, she decided to swim two more.

While pool bystanders tried to get her attention to stop, fellow swimmer Jocelyn Lowther commented, “She’s taking a victory lap.”

By touching the finish line in all four freestyle events this weekend at the Coral Springs Aquatic Center, the 96-year old Chase, from St. Augustine (pictured at right), became the first swimmer in the 30-year history of the Florida Senior Games to compete in the 95-99 age group.

She becomes the 14th Florida Senior Games athlete to compete in the 95+ age groups and is the fourth woman, joining Arda Perkins, Lillian Webb and Mary Kemp in the elite club.

“It took every ounce of strength I had to finish that race,” said Chase after winning gold medals in the 50, 100 and 500 yard freestyle on Sunday. She began her historic swimming performance on Saturday winning the 200 yard freestyle.

Chase has been swimming in the Florida Senior Games, since 2004, when she was in the 75-79 age group, and has competed in the National Senior Games since 2011.  She is quick to point out to everyone, “the Harvard Medical Journal calls swimming the best exercise available.”

She will also be quick to tell everyone she has lived a good life and is happy to still be swimming and competing.  Chase attended the 2021 Florida Senior Games with her son, Mark, and friend and coach Mary Converse.

Over two days of swimming at the Coral Springs Aquatic Center, a total of 55 age group records were broken.

While Chase was making headlines in the swimming pool, fellow 90-year old Hugh Brotherton, of Englewood, was defying the odds on the track with a gold medal winning time of 12:13.94.  Brotherton is an award-winning power walker who recently set records at the Huntsman Senior Games.

What made his performance one an odds defying one is because of the fall he took at the 5K Power Walk on Saturday and suffered quite a few scrapes and bruises.  He completed the race and earned a silver medal behind fellow 90-year old Gus Ormrod, of Fort Myers.

“I was ahead of him before I fell,” Brotherton said after receiving his silver medal on Saturday.  On Sunday he was one second short of breaking Ormrod’s 1500 meter Power Walk record in the 90-94 age group.

Other than Brotherton’s one second shy of the 90-94 age group Power Walk record, it was a fast track Sunday at the Ansin Sports Complex.  Of the 23 records set in running events, 20 of the new marks were set in races 200 meters and less.

The Powerlifting competition was held at the Rick Case Arena at Nova University and Sandy Simmons, of The Villages, won three of the four Best Lifter awards earning the Best Deadlist, Best Push Pull and Best Full Powerlifting honors.  The awards are determined by using the McCullough Formula, according to sport director Robert Keller, that combines the age and body weight of the lifter with the weight of the lift.

The 73-year old Simmons joked, “it’s easier when you get older.”

Those in attendance were surprised to see former Heavyweight Champion Evander Holyfield among the spectators in the crowd.  Holyfield, a resident of Hollywood, was there to watch a friend of his, WSVN Miami Sports Anchor, Mike DiPascuale competing in the 60-64 age group.

A local Broward County team, the Lauderdale 55s won the 55-59 age group Volleyball gold medal defeating the Spikers, a Tampa Bay area team, in three games of the championship final.  After splitting the first two games, Lauderdale jumped out to a 4-0 lead in game three and never trailed.  With a 13-11 lead, Lauderdale took advantage of a Strikers service error and hitting error to score the last two points and the win.  In the championship match, Lauderdale avenged a three-game pool play loss to the Strikers.

“We’ve never really played together before this weekend and we got better as the day progressed,” said Lauderdale team captain, Charles Donato. “We also took advantage of some of their errors.”

While 20 sports were contested in the Greater Fort Lauderdale area over the last nine days, there is still one sport left to be completed in the 30th Annual Florida Senior Games.  Pickleball will be held, Thursday, December 16 through Sunday, December 19, at the Country Club of Coral Springs.  Over 400 players are registered to compete in Men’s and Women’s Singles, Men’s and Women’s Doubles and Mixed Doubles.