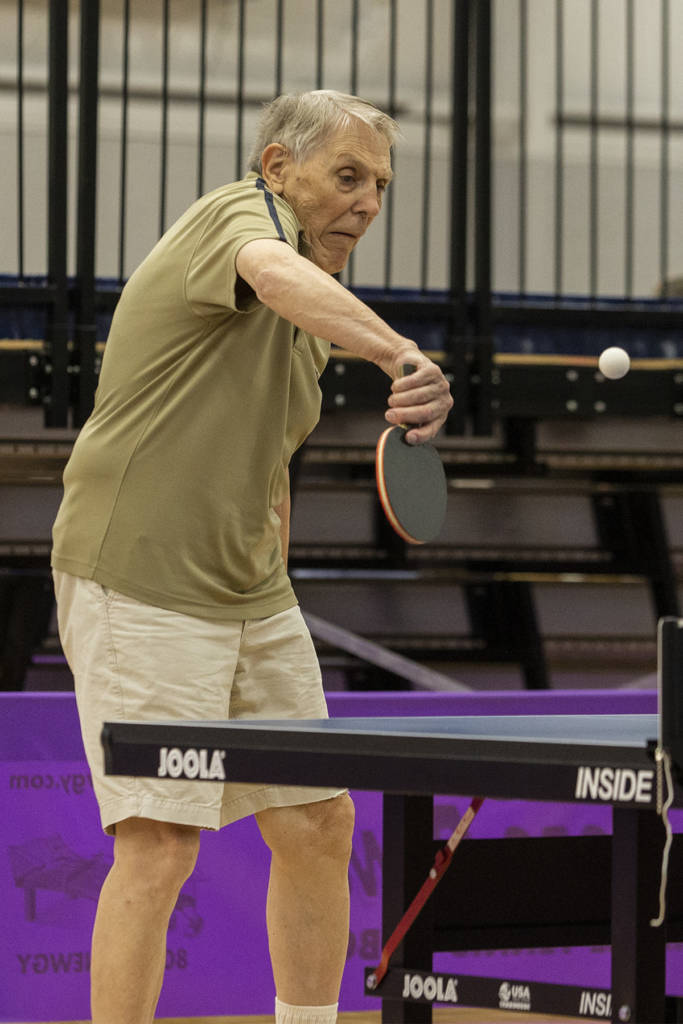 WESLEY CHAPEL – After winning a pair of Florida Senior Games Racquetball gold medals over the weekend at Richey Racquet, in Port Richey, Don Husmann (pictured at right) made a stop in Gainesville, on his way home to Atlantic Beach, to win a Table Tennis gold medal in the 90-94 age group.

On Tuesday, Husmann, won the Men’s Singles 90-94 age group gold medal, playing matches against Deane Chickering, of The Villages, and Robert Johnson, of Sun City Center, both registered in the 85-89 age group. He paired with Johnson to form an 85-89 age group team to face Chickering and John Shultz.

Over the weekend, he played a Men’s Singles match against Jimmy Petrandis, an 85-89 age group layer from Tallahassee, and teamed with Petrandis to play three matches in a combined pool with younger Men’s Doubles age groups.

Husmann began playing Racquetball once he retired in 1992 and later picked up Table Tennis. He played in the Massachusetts and New Hampshire Senior Games before relocating to Florida in 2013. He has competed in the National Senior Games since 1995 and represented Florida in the 2015 Games in Minneapolis and he 2017 Games in Birmingham.

At the 2017 National Senior Games, Husmann and his partner, William Burg, won a Men’s Doubles bronze medal in the 85-89 age group. But it came with consequences. Diving for a ball, he tore his rotator cuff.

“I got to the ball and it hit the front wall and then it hit one of my opponents,” Husmann said. “We got the point to tie the score 8-8, but after that we lost the match 11-8.”

Also winning a medal for the 28th consecutive year, was John Shultz, of Lakeland, who won the Men’s Singles 80-84 age group gold medal. He was undefeated in five pool play matches against a very competitive field, according to Table Tennis Sport Director Brad Woodington.

“He was seeded third in the group of six by his ranking and is at the high end of the age group,” Woodington said of the 84-year old Shultz. “He played very well today.”

On a chilly and windy day at the Duran Golf Course in Viera, Mark Guttenberg, of Port St. Lucie, recorded the low score of the day with a 78. With that score, Guttenberg carries a two-stroke lead into the second day of the 65-69 age group, 36-round competition over David Hodges, of Jacksonville, who shot an 80.

The 2019 Florida Senior Games Male Athlete of the Year, Ed Scheid, of Bradenton, returned to receive his award and won the 18-hole gold medal in the 75-79 age group with a score of 84, defeating the silver medalist Tony Webb, also of Bradenton, by seven strokes. Scheid was appearing in his 20th Florida Senior Games since 1999 and posted the lowest score of all 18-hole competitors.

The lowest women’s score was shot by Melanie Clegg, of Merritt Island, an 84, in the first of two days in the 36-hole women’s field. She returns to the course on Wednesday for her second round in the 50-54 age group.

A total of 56 Men’s Doubles Pickleball teams, in five age groups, were on the courts at the Sarah Vandeberg Tennis and Wellness Center in Zephyrhills, in the second of five days of action.

Goodson and Rogers battled through the consolation bracket after losing to Mike Bernaldo and Jason Young in the second round. They won three matches in the consolation bracket to advance to a championship match against Bernaldo and Young. They won the first matchup in straight sets and then won a final match 15-11 for the gold. With the game timed 11-11, Goodson and Rogers scored the final four points of the match for the victory.