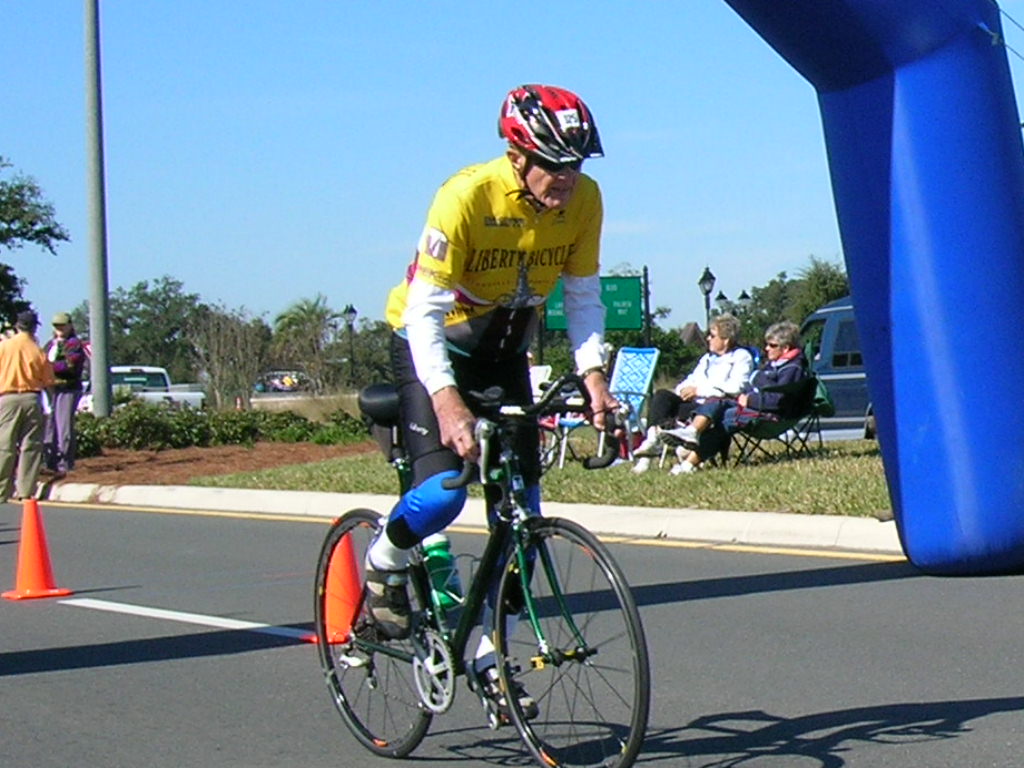 TALLAHASSEE, Fla. – It was the act of a gentleman; an act of a loving husband toward his wife of 59 years.

At the 2005 Florida Senior Games 5K Road Race, held at The Villages Polo Grounds, Charlie Futrell crossed the finish line and turned around to backtrack the course to finish the race with his wife, Peggy.

As they neared the finish line, with members of The Villages Cheerleading Squad encouraging them, Charlie (in the blue shorts and white ball cap) veered off to the right.  His moved allowed Peggy could enjoy her moment with her arms raised in triumph to celebrate the accomplishment.

After all, the 5K Road Race was only one of over 20 events during the week for Charlie.  He also competed in swimming, cycling, and track & field events.

Two months prior to the 2005 Florida Senior Games, Charlie competed in the Triathlon World Championships in Honolulu, Hawaii, and was the only competitor in the 85-89 age group. That competition made it quite certain to him, he was the oldest triathlete in the world.

In competing in four sports, Futrell won 19 medals at the 2005 Games, four in cycling, one road race, six in swimming and eight in track and field events.

Beginning in 1978, when Futrell “took up jogging,” through 2005, Futrell was in more than 80 triathlons and ran in over 400 road races by his estimate.

“He is the decorum of young at heart,” said Pam Henry, a recreation director at The Villages during the 2005 Florida Senior Games.  “He is an inspiration to all of the younger senior athletes here at The Villages.  He takes younger athletes under his wing and gives them pointers about how he got to where he is at his age.”

Futrell was diagnosed with an irregular heartbeat and heart murmur at the age of 16 and was told by one doctor to not participate in sports.  Fortunately, his parents took him to another doctor for a second opinion.  That doctor confirmed the heart irregularities but didn’t discourage him from participating in sports.  With that assurance, he went on to a baseball career that earned him a baseball scholarship at East Carolina University and an induction in the East Carolina Sports Hall of Fame in 1993.

His training schedule, at age 85, found him swimming four mornings a week, never less than a mile, running approximately four miles.  When in training for triathlon, he put in 90 to 100 miles a week on his eight-year old competition bike.

In 2006, Charlie Futrell was recognized in the “Wisdom of the Ages,” Museum Display, featuring individuals making significant contributions in a variety of fields, at age 80 or above.

Both Peggy and Charlie lived into their 90s and continued to make significant contributions to their family and friends.