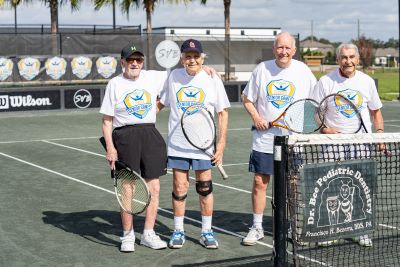 Nothing really surprising there.

However, the birthdays of the four gentlemen with racquets in hand ranged from June, 1926 to January, 1933.

The Men’s Doubles team of Donald Taylor (90) and Bill Troutman (89, turns 90 in January, 2023) served and volleyed back and forth with James Seidule (91) and Harry Clark (96). The outcome of the match really didn’t matter because all walked away with gold medals being the only athletes in their age groups. They both also qualified for the 2023 National Senior Games.

All four men played a variety of sports growing up and at some point in their lives and eventually discovered tennis. Three of the four served in the U.S. military. Three of the four had careers in education. One of the players, Donald Taylor (second from right in photo), is a Florida native and lifelong resident of Hillsborough County and one of the teams, Taylor and Troutman, will return to the Sarah Vande Berg Tennis and Wellness Center on Friday to play men’s doubles pickleball.

The 96-year old Clark’s message to younger Florida Senior Games athletes was simple. “Never give up,” he said. “I’ve had both shoulders fractured, just recently cracked a rib and had a melanoma operation that took most of the ligaments out of my knee. But once you quit, you quit.”

Taylor and Troutman have been playing as a doubles team for 40 years. The two were both working in the Hillsborough County School System and discovered they enjoyed playing tennis.

“We played at the USF Tennis Courts at night with the lights on and battled each other for hours,” Troutman said (second from left in photo). “We eventually decided to start playing together as a doubles team.”

On the course at Fox Hollow Golf Course another near 90 year old, George Ringham, had a good day winning the 85-89 age group gold medal with a score of 88, in his last year of that age group. While his score today was lower than his current age, there’s still one accomplishment on the course he’s chasing.

“I’ve played golf for 77 years and never had a hole in one,” he said. “My wife has two and my granddaughter has one.”

“I’ve got six sons and they all play golf,” Ringham said proudly.

The lowest overall score was carded by Calvin James Pfrogner, of Sarasota, with a 76. He finished in a tie with Nick Kent, of The Villages, but won the award via the USGA Tie Breaker Rule. Pfrogner won the gold medal in 80-84 age group by eight strokes, while Kent won the gold in the 75-79 age group by one stroke. The lowest women’s score was a 78, shot by Jodi Kest, of The Villages, to win the 60-64 age group gold medal, 11 strokes ahead of the silver medalist.

The 2022 Florida Senior Games, presented by Humana, continues Tuesday with Men’s and Women’s Doubles at the Sarah Vande Berg Tennis Center, in Zephyrhills and the 70+ Table Tennis age groups in action at the Simpson Park Community Center, in Lakeland.

CLICK HERE for a video from the Opening Ceremony on Friday, December 2

The 31st Annual Florida Senior Games, is a program of the Florida Sports Foundation, the official sports and promotion organization of the State of Florida, presented in conjunction with Florida’s Sports Coast.