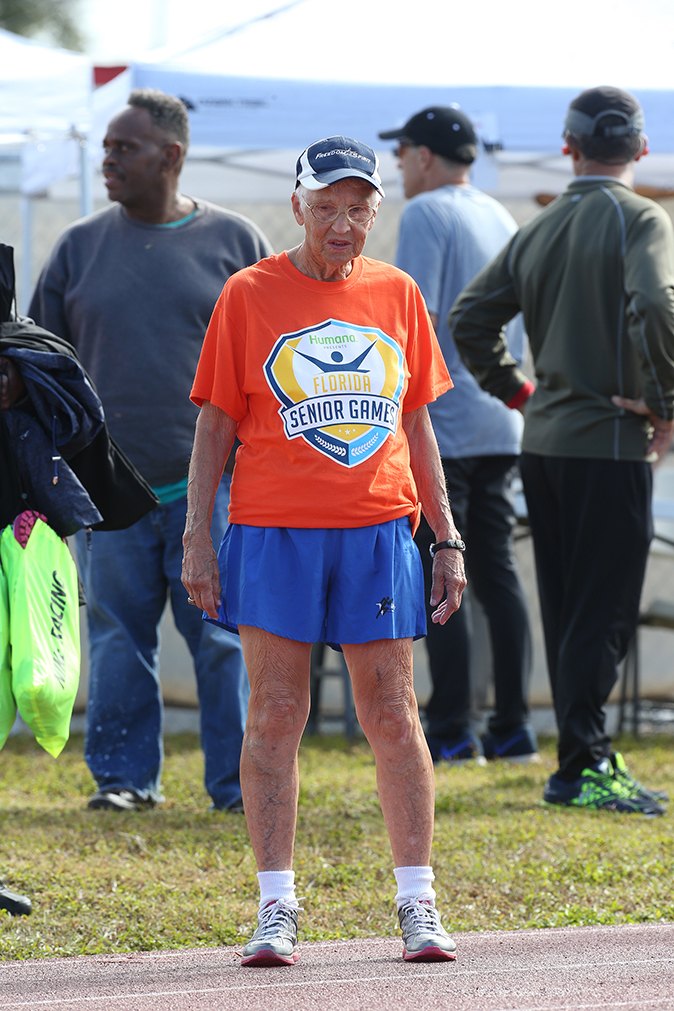 Lehmann traveled from her home in Largo to win Polk Senior Games’ medals in the 90-94 age group in Track and Field, Horseshoes, Punt Pass and Kick and Softball Throw.

Active in sports since her youth, Lehman was the MVP of the Hicksville High School softball team, in Long Island, N.Y. Like many Senior Games athletes, Lehmann took time off from athletics to tend to family matters.  Once she moved to Florida, she re-entered the world of competition.

“It’s all the exercise I do,” Lehmann said, and then went on to list her activities. “I play softball two times a week. I run 2.5 miles twice a week, and I bowl twice a week. I’m sure that’s what keeps me going.”

Lehmann plays softball with the famed 75+ St. Petersburg Kids and Cubs team and is the only woman to play in the team’s 90-year history.  Her 2.5 mile runs take her through her Largo neighborhood to nearby Taylor Park and back. She admits that as her age increased her bowling scores have decreased to about 150 to 130 and has gone from a 12-pound ball to a 10 pounder.

After discovering a Senior softball league in the early 1990s, Lehmann began a track and field career that has been equally successful.  Her first entry into the National Senior Games produced fourth place finishes in the 400 and 800 meter runs and a fifth place finish in the 1500 meter run.

Here memory of that trip to Syracuse, N.Y., for the 1991 U.S. National Senior Sports Classic (The Senior Olympics), where she was one of 72 Florida athletes competing, was a life-changing one.

“I realized I was not a distance runner,” she recalled.  “I didn’t do that well and realized my fast-twitch muscles were better suited for sprints.”

With the formation of the Florida Senior Games in 1992, she began her gold-medal winning and record-setting ways as ambassador for the State.

Lehmann was named the 1997 Florida Senior Games Athlete of the Year, winning gold medals in Basketball Shooting, 100- and 200-meter dash, high jump, javelin and silver in the discus, in the 65-69 age group.

As the lone 90-94 age group athlete, her softball throw was topped only by athletes in the 50s age groups.

“I used to have a really strong arm,” Lehmann said, also evidenced by her medals and records in the javelin and discus throw. “But I’ve lost a lot of extra zip over the years. I’ve injured my shoulder quite a few times. I still play shortstop for the Freedom Spirit team, but not the Kids and Cubs team.  They play me at second base or in the outfield.”

Beverly Eggert, a teammate of Lehmann’s on the Freedom Spirit team, in the outfield, off and on since 1995, can attest to her strong arm and skills on the softball field.  Eggert was on the 2019 National Senior Games bronze-medal winning team in Albuquerque, N.M.

“She knows the game inside and out and is a good all-around player,” said Eggert, of Largo, who was originally recruited for the team from a group of volleyball players. She’s always been a very good hitter and shortstop.  She’s still very athletically inclined.”

“I’ve been really blessed with good health and the ability to do well,” Lehmann says. “I just always try to do the best I can.”

As she advances into her fourth decade of the Florida Senior Games and her seventh age group, Ethel Lehmann doesn’t plan on slowing down anytime soon.  She references her aunt and godmother on her mother’s side of the family who lived to be 104 years old.

“I’ve got her white hair and people say I look like her,” she said. “When I reach that age, I want to hit a homerun and drop dead at home plate.”