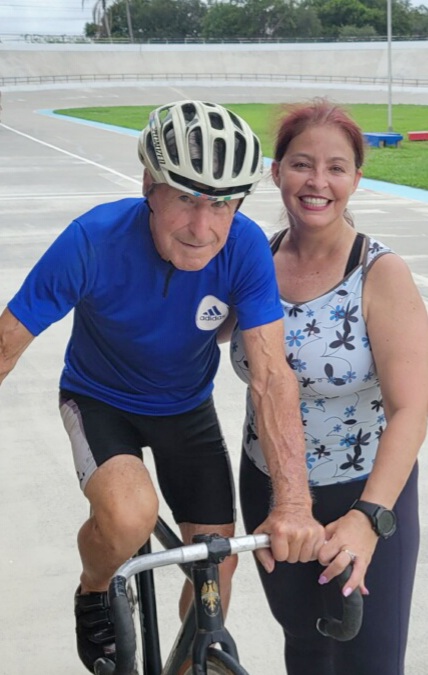 It’s rare that individuals are recognized with one, “Lifetime Achievement Award.” At the 2022 National Senior Games, Luigi Fabbri, of Hallandale Beach, will add an unofficial lifetime achievement award to his collection when he competes alongside his daughter, Gabriella, as Senior Games athletes in cycling. The Fabbris are the second parent and child from Florida to compete in the National Senior Games together. Tallahassee’s Shirley Butler bowled, while her son Pete, was a cyclist in the 2017 National Senior Games.

Fabbri, now competing in the 85-89 age group, was one of 10 athletes recognized by the Florida Senior Games, in December 2021, with the Lifetime Achievement Award. Those 10 athletes have competed in all four decades of Florida’s annual Olympic-style Sports Festival for athletes age 50 and over, from the 1990s to the 2020s.

His daughter, Gabriella, is riding in the 5K and 10K Time Trials in the 55-59 age group, on Wednesday, May 18, and Thursday, May 19, respectively. Her experience is not as extensive as her father’s. She is riding her first race event with her father and wants to follow in his footsteps. “He’s my motivation and inspiration,” Gabriella said of her father. “I’ve got some big shoes to fill. But I’m in it for the long haul.”

Gabriella admits she decided to take up her father’s sport of choice after riding with him at the Velodrome, at Brian Piccolo Park, on Father’s Day last year. She started training a short time afterward and works out with Luigi, “three or four times a week, depending on her work schedule,” according to the trainer and mentor.

“To think he has so much wisdom and experience to share, I’d be a fool not to learn from him,” said Gabriella. “ I only wish I had not waited until this year to start cycling. But as the saying goes ‘Better late than never.’”

She registered for the 2022 National Senior Games after registration was opened up to athletes who did not have a qualifying performance.

“I’m very new to the cycling world,” Gabriella said. “During the training with my dad, he’s put me on a diet and started me learning the basics, like how to get in and out of the pedals. We’ve also worked on pre-race warm ups and how to start a race strong and finish easy.”

The Florida Senior Games Cyclist of four decades, Luigi Fabbri, sees a long future ahead in the sport for his daughter.

“She’s doing very good,” he said of her training. “I practice really hard and so does she.” While the father and daughter are riding in two different races, they will share the same feelings of rolling up to the starting line to begin the race. They will also feel the same satisfaction of crossing the finish line.