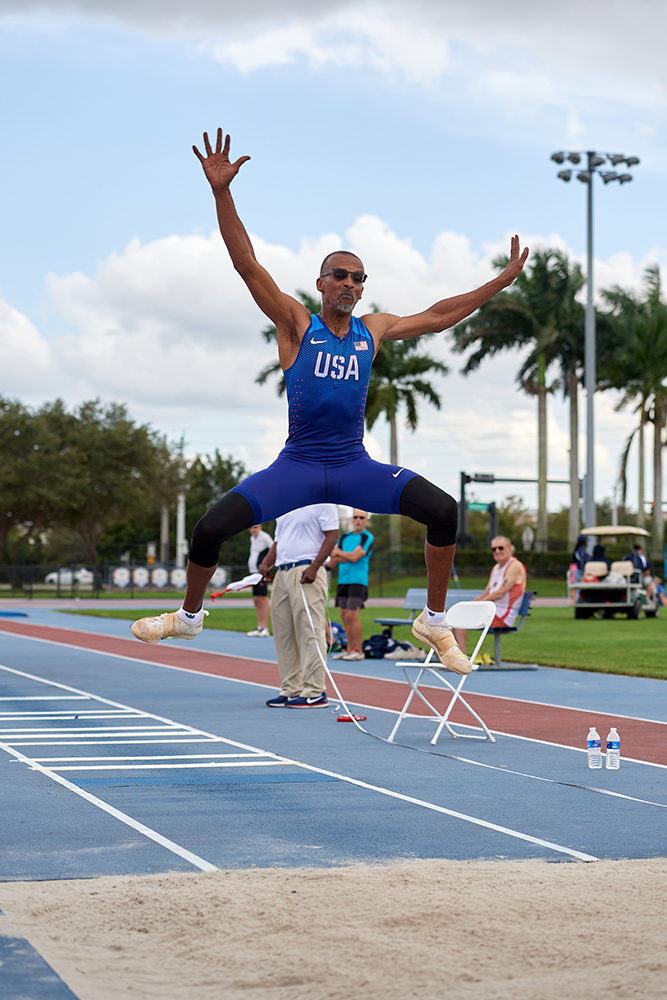 FORT LAUDERDALE, Fla. – Dating back to its origins as the original Olympic sport, the Track & Field competition fielded the 2019 Florida Senior Games presented by Humana’s largest registrant and participant field as 226 athletes signed up to compete in a total of 671 events over the two-day stretch at the Ansin Sports Complex in Miramar.

Before being recognized and honored with the 2018 Florida Senior Games Male Athlete of the Year on Sunday, Brian Hankerson, of Hollywood, posted a record-setting day as his gold medal performances in the high jump (5’ 5.75”), triple jump (34’ 5.39”) and long jump (17’ 8.99”) all set the record in the 60-64.  Saturday’s victory of the triple crown of jumping events raises the bar as Hankerson now holds the age group records in 50-54, 55-9, and 60-64 in each of the jumping disciplines.

“I’m excited to be here and compete,” said Hankerson, who was originally slated for four running events on Sunday. “I am thankful for this honor and recognition. My grandson’s christening is tomorrow and subsequently, I’m withdrawing from the 50- and 100-meter races to attend the service.’” Hankerson, who will be honored at 9 a.m. on the track at Ansin, will return in the afternoon after his grandson’s christening to compete in the 200- and 400-meter competitions.

Avis Vaught, of The Villages, is back on the track after recovering from major shoulder surgery in June. Four events later, Vaught, who was released this week by her doctor to compete, tallied three golds and a silver in her return. Vaught, who served as the FSG softball sport director this past August, won the discus (59’ 5.78”), javelin (68’ 0.93”), and shot put (22’ 10.41”) in the 70-74 age group while collecting the silver in triple jump (17’ 9.78”).

Finally, Stuart Spangenberg, of Melbourne, channeled his inner Jan Železný, current world record holder in the javelin at 98.48 meters, and launched the furthest spear, 161′ 9.73″, to win the golf in the 60-64 age group.

The gold-medal winning Shuffleboard team of Michael Zellner, of Holiday and Jim Allen, of Seminole, are not just players on the court but ambassadors and entrepreneurs for the game off the court.

Meaning they are respected and admired for their achievements and quality.

After Zellner retired from the Air Force where he was a communications and crew member on Air Force One and other U.S. Government executive level flights, he moved to Brazil.  For a year he worked at the U.S. Embassy and moved on to become a professor at the University of Sao Paulo teaching English as a second language.

In his spare time, between 1993 and 2015, he introduced shuffleboard to Brazilians and over the course of 16 years, put together a national team that traveled to international tournaments.  Zellner proudly claimed the team’s highest finish was a silver medal at a competition in Canada in 1997.

Also, during his time in Brazil, he became the President of the International Shuffleboard Association, serving from 2010-16.

Teaming with Zellner was Jim Allen, who manages Allen R Shuffleboard, a premier manufacturer of Shuffleboard equipment, based in Seminole, that has been in his family since 1941.  The company, started by his grandfather, supplies shuffleboard cues and discs among other things to players around the country.

“I’m looking around here today and can say I made most of these cues people are using,” he said during a doubles match with Zellner.

In just two years, Hope Powers, of Pompano Beach, has gone from a beginning Powerlifter to a USAPL State Record Holder.  Powers set records in the Squat and Deadlift, while establishing a personal best in the Bench Press at the Vernon Hargay Youth Enrichment Center, in Miramar.

Her record-setting deadlift of 352 pounds was a follow up of a disqualified lift at a recent meet.

“I had a little hitch in my lift,” Powers said.  “I got it up fine but just had a that hitch.  I knew I could do it but just had to come out and make it happen today.”

The Best Male Powerlifter Award went to Mosbeh Elkanany, from Coral Gables, the Bench Press Champion was Darian Bryant, of Sunrise, and the Deadlift Champion was Kirk Carver, from The Villages.

Erica Gonzalez, of Poinciana, won her third Pickleball gold medal on the third and final day of competition at the DS Sports Plex.  She teamed with Scott Austin, of Hanover, PA, to win the 50-54 age group Mixed Doubles.  On Thursday, she won the Women’s Singles gold and teamed with Jana Spanos, of The Villages, to win the Women’s Doubles gold medal.

Sylvia Whitehouse, of Palm Coast, teamed to win the Mixed Doubles gold medal with Brad Redmond, in the 55-59 age group.  It was Whitehouse’s eighth doubles gold medal (Women’s and Mixed Combined) since 2018. She and Redmond won all four matches in straight sets with no opponents scoring more than seven points. Whitehouse was also a Women’s Doubles gold medalist at the 2019 National Senior Games, teaming with Jana Spanos.

One of three athletes in the 95-99 age group at the 2019 Games, Herschel Sotzsky, of Pembroke Pines, was in action today winning a Billiards gold medal at Beyond Billiards.  As the only athlete in the age group, he played one match and won a best of three match in two games, against Irwin Klar, an 89-year old from Deerfield Beach.  The two other 95-99 age group athletes will, Mary Kemp, of Boca Raton, and James Bell, of Sebastian, are competing in the running events of the Track and Field meet on Sunday.

Tobias Kaye was back on the court with a different kind of racquetball on Saturday, playing Men’s Singles Racquetball at the David Posnack Jewish Community Center.  He played nine pickleball matches on Thursday and Friday winning silver medals in the 65-69 age group in Men’s Singles and Doubles.  He added three racquetball matches to his total on Saturday for 12 over the last three days.

Kaye advanced out of pool play to the championship bracket and just missed a trip to the finals, losing to his doubles partner George Goebel.

Kaye and Goebel will team together in the Men’s Doubles 65-69 age group on Sunday and he will team with Arlynn Abramson in Mixed Doubles.

Garland Reynolds, of Frostproof, added two more medals to his total for the week, winning the Free Throw Shooting and Spot Field Goal Shooting events in the 65-69 age group at the DS Sports Plex.  Reynolds hit 27 of 30 free throws and hit 9 of 15 shots from various locations on the court for the Spot Shooting Gold.

Among the Women’s Basketball Shooters, Trish LeGros, of Longwood, hit 27 of 30 free throws for the top overall performance and win the 60-64 age group gold medal.  Carol Waters, of The Villages, had the top Spot Shooting score, hitting 11 of 15 shots and tallied 101 points in the Timed Field Goal Shooting to win the 70-74 age group.  Waters hit 20 three-point shots for her triple digit score.

Tennis wrapped up its five-day competition on Saturday, fielding mixed doubles on the court.  In the 60-64 age group, Tom and Rebecca Marvin, first time Florida Senior Games athletes, swept through their bracket to win the gold. The husband and wife duo, of Port St Lucie, first topped Colleen Perry and Nick Berry in the semifinals before winning the championship over Joanne Tramonte & Van Saxon with a 6-1, 6-4 showing in the final. The Marvin’s made their way to the 2019 Games after competing in the Martin County Senior Games in late October.

Sunday is the final day of competition at the 2019 Florida Senior Games presented by Humana.  Day two of the track and field championships will see runners test their speed and endurance in events ranging from 50 meters to 1500 meters. The second day of Racquetball will see men’s doubles and mixed doubles on the courts at the David Posnack Jewish Community Center in Davie. Volleyball will wrap up the 2019 Games with 6-on-6 competition at the DS Sports Plex in Deerfield Beach.