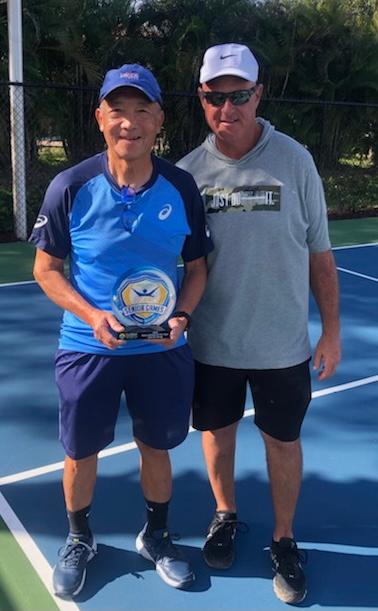 CORAL SPRINGS – Gabriel Wong celebrated his 2020 Florida Senior Games Male Athlete of the Year Award, presented Thursday at the opening day of the Pickleball, competition, by winning his fifth consecutive gold medal in the 75-79 age group.

Wong, from Ponte Vedra Beach, (on left in photo, with sport director Andy Rubenstein), won his first two matches without allowing his opponents a point, in one game matches.  In the final two best-of-three matches, he won both in straight sets.  He defeated Julian Gershaw, of Delray Beach, 11-9, 11-9, to win the gold medal, at the Country Club of Coral Springs.

Last week, Wong earned the gold medal in the Men’s Singles Tennis 70-74 age group.  He has pulled Florida Senior Games double duty in Pickleball and Tennis, since 2017, and has combined to win nine gold medals.

The 2020 Florida Senior Games Female Athlete of the Year, Sandra Garner, of Daytona Beach, was presented with her Award at the Volleyball competition, on Saturday, December 11, at the David Posnack Jewish Community Center.

The second of four days of Pickleball continue Friday with all Women’s Doubles Age Groups and the 70 and above Men’s Age Doubles age groups. Over 400 athletes are competing in the Pickleball Championships and over 1,800 athletes, age 50 and over, registered to compete in the 30th Annual Florida Senior Games.