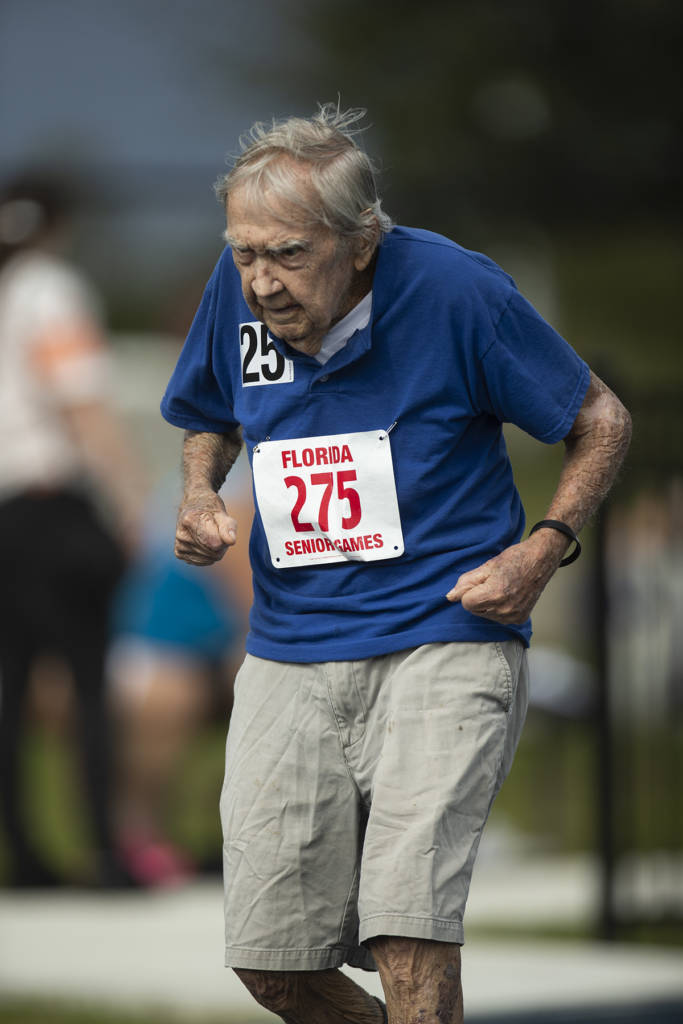 Bell, who made the quick trip to Viera from Sebastian to compete in the 1500 meter Power Walk, the 50 meter and 100 meter dash.  The native of Miami and a World War II veteran who served in the U.S. Marines, is now the record holder in all three events in the 95-99 age group. Bell is one of six athletes over the age of 90 competing in the 2020 Florida Senior Games.

When Bell crossed the finish line in the 100 meter dash to establish a 95-99 age group record with a time of 1:11.80, he was greeted with the loudest round of applause of the day by the fans in the bleachers.

Bell was accompanied by his son, Shaun, on Saturday, who claimed his father walks two miles a day between 2:00 and 3:00 a.m.  He will mow his yard if Shaun doesn’t show up on time to accomplish the chore.

All three of Murphy’s gold medal winning performances in the 50-54 age group were the quickest times in the 29-year history of the event in the Florida Senior Games.  Her 200 meter time was four seconds faster than the mark set by Donna Settles in 2000.

She also ran the final leg of the 4×100 meter relay team, along with Denise Chambers, Sonder Hawkins and Raquel Bethel.

The morning began with the 1500 meter Race Walk and Dave Swarts, of Jackson, Michigan, returned to set his second Florida Senior Games Race Walk record in approximately 15 hours.  His time of 6:51.24 is the new overall best time in the event and a new 55-59 age group mark.  He accomplished the same two feats Friday evening in the 5000 meter Race Walk.

The final day of the 2020 Florida Senior Games begins with the 5K Road Race, at 7:00 a.m., in conjunction with the Pineapple Man Triathlon Run at Ryckman Park in Melbourne.  The field events of the Track and Field Meet at Holy Trinity Episcopal Academy begin at 8:00 a.m. with the long jump and discus events. The final events, the triple jump and shot put are scheduled to begin at 2:00 p.m.  Powerlifting will be contested at the Renaissance Orlando Airport Hotel beginning at 9:00 a.m.