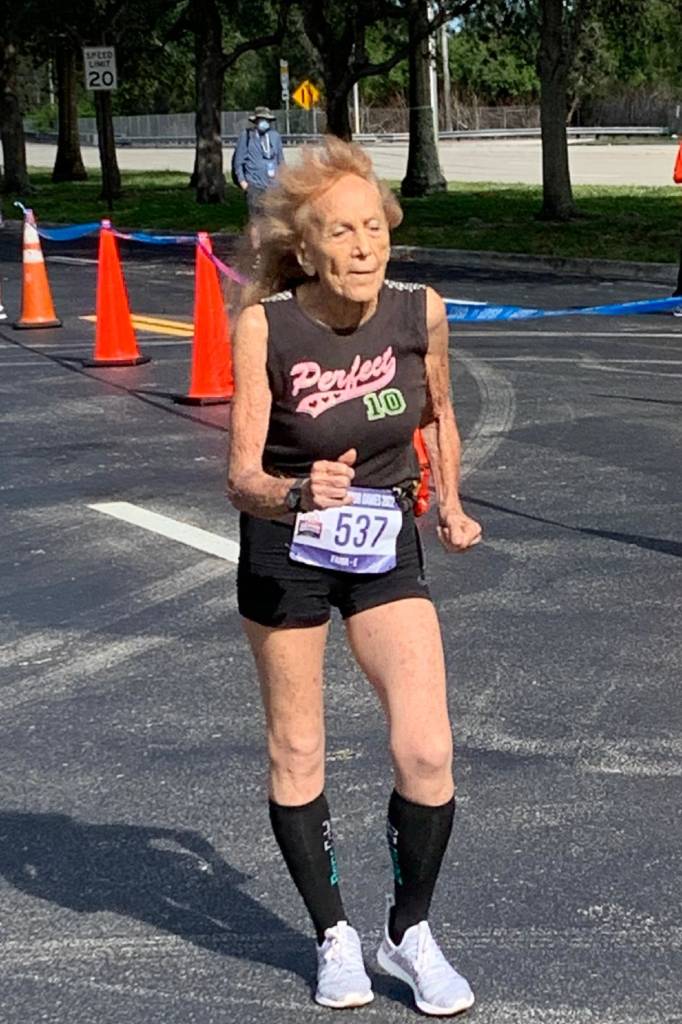 On her way home from the 2016 Florida Senior Games in Clearwater, Essie Faria’s competition days in the Florida and National Senior Games almost came to an end.

After a stop to visit her daughter in Melbourne, Faria was almost to her North Miami home, after winning eight gold medals in track and field events and one more in the 1500 meter race walk, in the 80-84 age group.

In the Boynton Beach area, traveling 65 miles per hour, her car was rear ended on Interstate 95.  She estimated the driver of the car that hit her must have been going 90 miles an hour.

On Wednesday morning, Faria, now living in Melbourne, was at the starting line for the 2022 National Senior Games, presented by Humana, 5K Power Walk, at the FLA Live Arena, about 40 miles from the site of her accident.

“It sounded like a bomb went off, an explosion,” Faria recalled. “The guy who hit me was a military service veteran on the way to get some treatment in Miami. He was texting and not paying attention and hit me.”

While Faria was extremely banged up after the accident, she refused to be transported to the hospital. While recovering on her own, she was encouraged to seek physical therapy to regain the strength that earned her the 2011 Florida Senior Games Female Athlete of the Year.

Faria’s time of 45:29 Wednesday morning was good for a silver medal in the 85-89 age group. The medal came as a complete surprise to her.

“I even fell down at one point,” Faria said with a laugh. “A lady came up to me afterwards and apologized for not stopping to help. But I understood.”

While Faria has competed in the Florida Senior Games in 2020 and 2021 in Power Walk events, this is her first National Senior Games since the 2015 Games in Minneapolis, Minnesota. She competes in Table Tennis next week.

To begin the day of Race Walk and Power Walk, twin sisters, Sharon Haley and Karen Wood, of Clearwater, were the overall second and fourth finishers in the 5K Race Walk. The duo was pacing third and fourth overall in the field of Race Walkers, but in the last 50 yards, Sharon overcame, Karen Swisher, from Wisconsin, to place second overall.

She claimed to have found another gear to pass Swisher and win a silver medal in the 60-64 age group with a time of 32:34, seven seconds behind Laura Draelos, of Albuquerque, New Mexico.  On Tuesday, Haley passed Draelos down the stretch to be the top overall finisher in the 1500 meter Race Walk.

“I got first yesterday and she got first today,” Sharon said.  “So that’s ok.”

Both were extremely proud of their times and finishes. In training for the 2022 National Senior Games, presented by Humana, Sharon was clocking times around nine minutes for the 1500 meter and finished with a time of 8:48. Karen posted a 1500 meter time of 9:57 at the 2021 Florida Senior Games, in December, and crossed the finish line at 9:17 on Tuesday.

To close the day, Florida was well represented at the Torch Arrival, at Los Olas Oceanside Park, for the official start of the 2022 National Senior Games. Members of the Broward Heat Basketball Team, Mattie Lenhardt and Roni Lakatos, began the Torch Run and handed off to Dee Pack, of the Alabama Senior Games. Pack then passed the torch to Hollywood’s Brian Hankerson. The torch went to Ed Roberts, from the Texas Senior Games, and finally to Katherine Switzer, the first woman to run in the Boston Marathon.

The 2022 National Senior Games continue in the Greater Fort Lauderdale Area through May 23.  For daily updates, visit www.nsga.com/2022Daily.