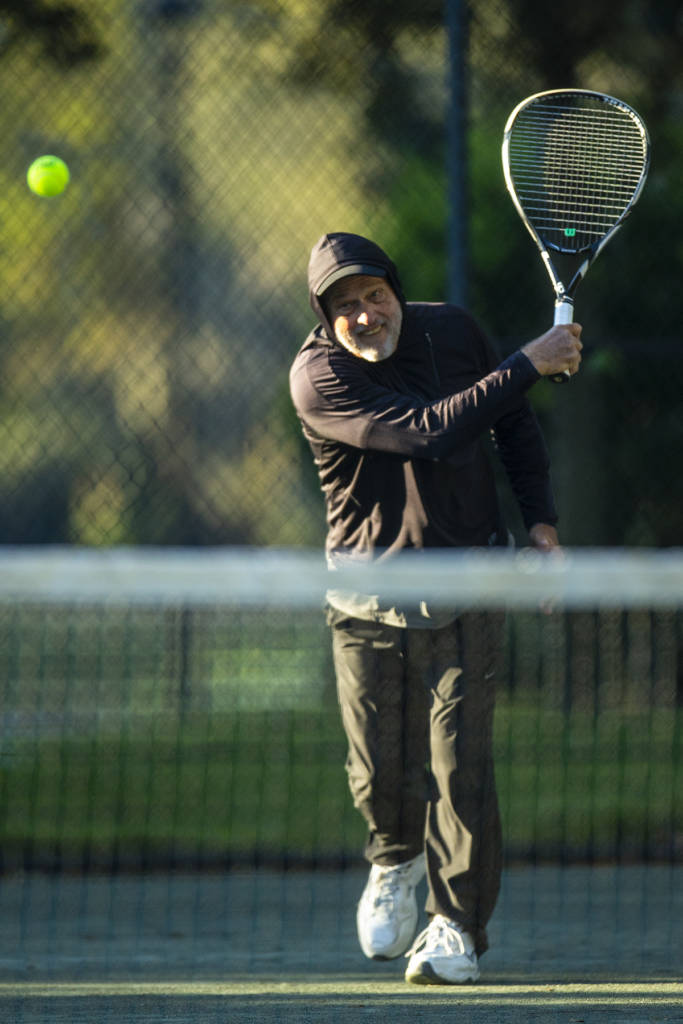 WESLEY CHAPEL – There was a collection of Florida Senior Games Tennis gold medalists on the courts at the Innisbrook Tennis Complex Wednesday in the Mixed Doubles bracket.

To advance to the championship match, Murray and Roscia battled back after a first set loss, to defeat Judi and Aubrey Whitaker (pictured at right)  of Lake Wales, 2-6, 6-3, 10-5. The Whitakers won three consecutive gold medals in the 65-69 age group from 2014-16.

It was the second matchup between Whitaker and Roscia in the last couple of days as the two met in the 70-74 Men’s Doubles final on Tuesday. Whitaker teamed with Gary Bartlett to defeat Roscia and James Bell to win the gold medal, with Roscia taking the silver.

David Hodges, of Jacksonville saved one of his best holes for last in winning the 65-69 age group gold medal in the Men’s Golf 36-hole competition at the Duran Golf Course in Viera. After the shotgun start had him beginning on the 11th hole, he ended his day with a birdie on the par four 10th hole with a two-day score of 158 (90/77), to card the lowest overall men’s score.

“I hit my driver and then a nine iron shot that landed two feet from the cup,” Hodges said. “I got the birdie with the putt.”

Hodges improved on his 2019 Florida Senior Games performance when he won a bronze medal. With the gold medal, he qualifies for the 2021 National Senior Games where he “absolutely,” plans to compete.

Melanie Clegg, of Merritt Island, posted the lowest women’s scores of both days of the 36-hole event, an 84 and 82, to win the 50-54 age group gold medal with the overall lowest two day total of 166. Her score was also the overall lowest women’s total since the 36-hole competition began in 2015 and established a new age group record. The previous two-day low score was 168, shot by Janet Brown, of Lakeland in 2016.

Four of the five brackets played in Women’s Doubles Pickleball at the Sarah Vande Berg Tennis and Wellness Center ended with an “If Necessary,” game. In three of those four brackets the consolation bracket team won twice against the undefeated team to win the gold medals.

In the 15 team 60-64 bracket, Nancy Corona, of Sarasota and Karen McManus, of Venice, found themselves in the consolation bracket after losing their first match of the day to Joan Azeka and Christine Borgmeyer. They won five consecutive matches, incliuding a win over Azeka and Borgmeyer to advance to the championship match against Janet DeCostro and Michelle Foster. After winning the first set, 11-7, the match was called due to an injury to DeCostro.

Diane Bock, of The Villages, and Coleen Wells, of Groveport, Ohio, dropped into the consolation bracket after losing a semifinal match to Nancy Robertson and Sandra Metzler, of Naples. They defeated the bronze medalists Pat Sargeant and Jodi Yambor, of Tallahassee, to force a rematch against Robertson and Metzler. Bock and Wells won the first match 6-11, 11-6, 12-10 and then took the “If Necessary,” game 15-8.

It was the 10th women’s doubles gold medal for Bock since she began playing in the 50-54 age group in 2008. All totaled 55 women’s doubles teams were on the courts Wednesday.