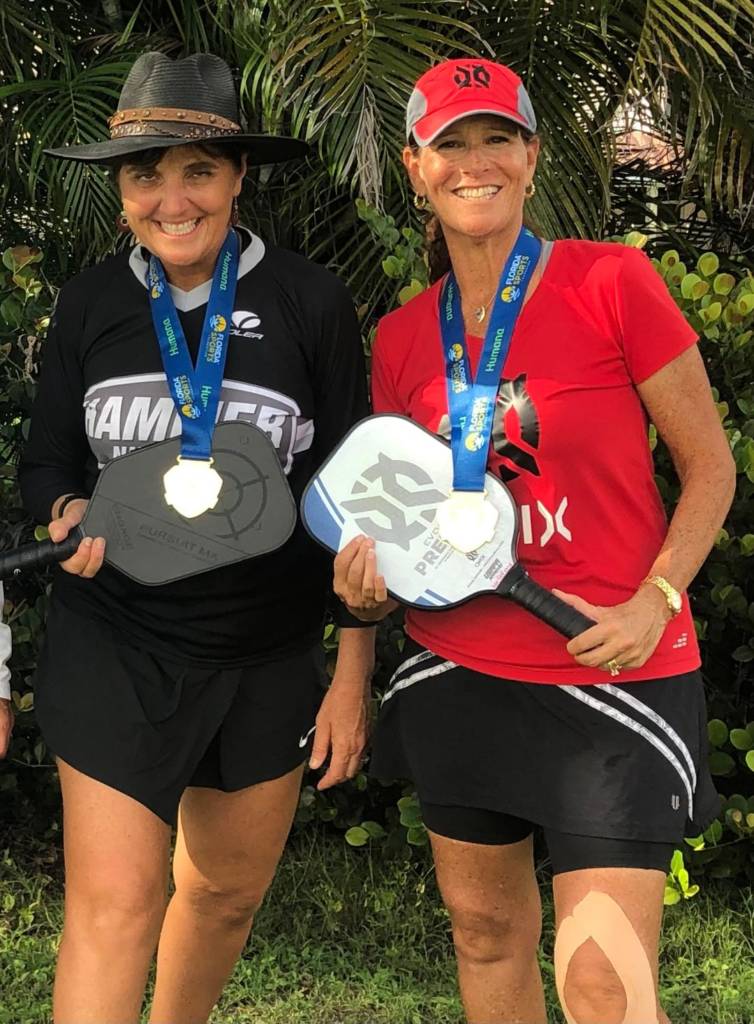 CORAL SPRINGS – A pair of Women’s Pickleball powerhouses added to their Florida Senior Games gold medal totals as Erica Gonzalez and Jana Spano teamed to win the 55-59 age group Women’s Doubles Championship Friday at the Country Club of Coral Springs
.
Together, the duo has combined to win 15 gold medals prior to today’s win.  Gonzalez, of Poinciana (right in photo), won 10 gold medals between 2015 and 2019, with three women’s singles golds, five women’s doubles and two mixed doubles in the 50-54 age group.  Spano, of The Villages, won one women’s singles gold, three women’s doubles and one mixed doubles.  Gonzalez and Spano teamed together to win the Women’s Doubles 50-54 age group gold in 2019.

Gonzalez and Spano were undefeated in four matches in the 11-team double elimination bracket in the 55-59 age group. They defeated Denise Byers, of Sun City Center, and  Cynthia Mitze, of Wimauma, in the championship match, 11-3, 11-1.

In the largest bracket of the day, the Women’s Doubles 60-64 age group, with 14 teams, Holly Bacon, of Bonita Springs, and Audrey Bamberger, of Naples, emerged victorious. Bacon and Bamberger defeated Kaye Weldon and Elizabeth Wenzel, of Boca Raton, 11-2, 5-11, 11-5 in the final.

Men’s Doubles continues on Saturday, with competition in the 50-54, 55-59, 60-64 and 65-69 age groups.  Mixed Doubles will be played on Sunday. Over 400 athletes are competing in the Pickleball Championships and over 1,800 athletes, age 50 and over, registered to compete in the 30th Annual Florida Senior Games.