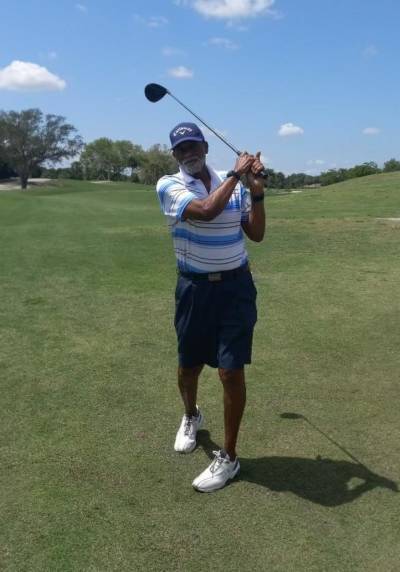 Editor’s Note: This article was written prior to the completion of the three-day competition. James was a bronze medal winner with a combined score of 232, nine strokes behind the gold medalist. After scores of 77 and 75 on the first two days, he had an 80 on the final day, but held on to third place. “I double-bogeyed the first hole, but didn’t do it again and held on.”

Charles James is the first to admit he may have a “home field advantage” in the 2022 National Senior Games, presented by Humana, Golf competition.

The Country Club of Coral Springs, where the Men’s 80-84 age group is playing, is a 30-minute drive from his Pembroke Pines home. He played the course in a local summer league a few years ago and knows its intricacies, including what the course website calls “some of the best greens in Florida.”

James is using those greens to his advantage against the out-of-town field. “The greens are very fast, like pro greens,” James said after his second of three rounds. “Since I know the course, I know how to manage the greens well. It’s like putting on concrete.”

James’ strategy of playing each hole for a par is working well. He shot a 77 in the first round and followed up with a 75 on day two. Entering the final round, he is currently in third place, six strokes behind the leader, one behind the current second place golfer and two ahead of fourth place, in the 37 athlete field.

On day two, he notched par scores on 10 holes, had five bogeys but evened those out with an eagle and three birdies.

“I’m playing very well on those slick greens,” James said. “Having played the course before, I know where all the bones are buried.”

James qualified for the 2022 National Senior Games presented by Humana by winning the 80-84 age group gold medal in the 2021 Florida Senior Games. His score of 79 was the overall low score of all golfers. He also competed in basketball shooting, winning two silver medals and a bronze, and bowling, where he finished fifth in his age group.

With his golf success, it’s obvious he spends more time on the sport than the others. But how he achieves his success is a bit out of the ordinary.

“I’m a self-taught golfer,” James said. “I started playing golf while I was in the military and I learned by watching a lot of golf videos. Now I watch them on YouTube and I watch the pros on television.”

He also applies what he learns by playing on a variety of South Florida golf courses and he claims to learn the most from watching women’s golfers in LPGA tournaments.

“The women are more precise in their game,” he said. “In the men’s game, it’s all about driving the ball 300 yards off the tee. Once you get within 150 yards of the pin, it’s all equal. On the greens, women can putt just as well as men.”

James ended up in South Florida after retiring from the Army where he served as medical supervisor. He had two tours of duty in Vietnam, in 1966-67 and 1970-71, supervising as many as 30 medics who worked in clinics on the front lines.

“I would visit the field clinics once a month and rotate the medics in and out,” he said. “After a month, they needed breaks after all they saw.”

When he retired in 1987, he earned a teaching certificate and became an Army ROTC instructor at Miami Jackson and Miami Edison High School. He was assigned to those schools and the Houston, Texas native has been in South Florida since.

“I was born and raised in Houston and the rest of my family still lives in a 50-mile radius of Houston,” James said.

The Florida Senior Games is glad you are part of the team and earning 2022 National Senior Games medals for Team Florida.