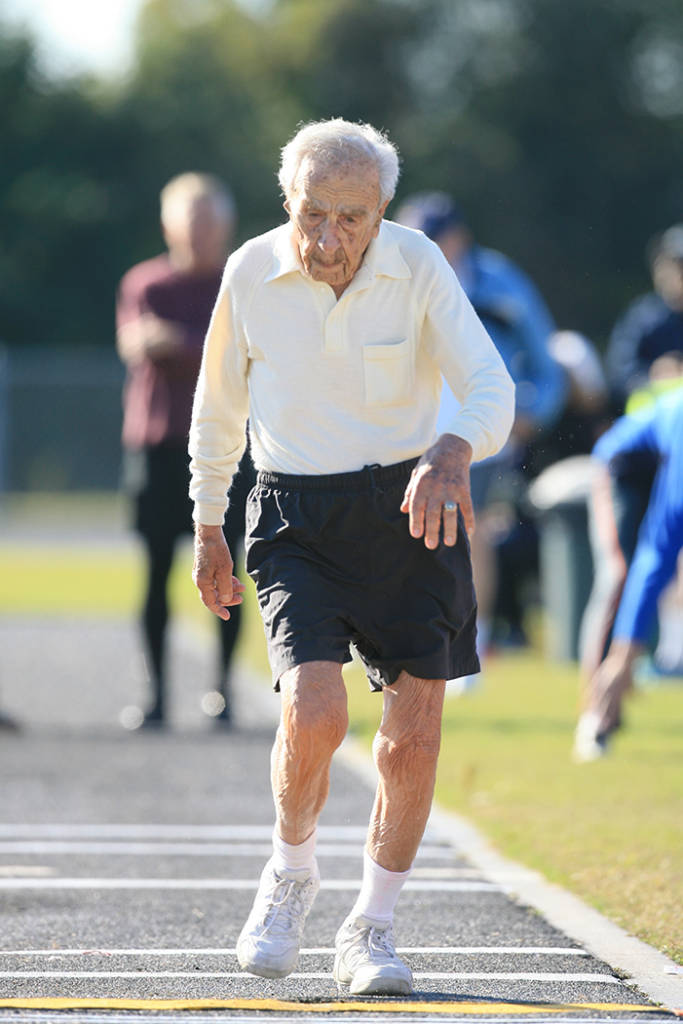 TALLAHASSEE, Fla. – In 28 years of the Games, only three centenarians, John Donnelly, of Sun City Center, Roger Gentilhomme, of Dunedin and James Kales, of Bonita Springs, have competed.  Their accomplishments and good nature drew national attention.

“He was always busy; he always had plans; he always had goals; and he had passions. We learned over the past several years how important it is to have passions, because it gives you a reason to get up in the morning and to stay active,’’ his daughter Calla Jean Shaefer-Adams said.

Shaeffer accompanied Roger to the Games in Fort Myers on several occasions and compared keeping up with him to following a “rock star.”

Besides his Florida Senior Games accomplishments, he matched wits and racquets with Regis Philbin during an appearance on “Live! With Regis and Kelly on July 8, 2009.

He was featured in a 2011 documentary, “Age of Champions,” as he prepared for the 2009 National Senior Games.

He was a favorite of the local media covering the Games and sport directors who worked with him over the years. Gentilhomme passed away in 2011 at the age of 102.

John Donnelly was registered to be the lone 100-year old competitor in the 2006 Florida Senior Games, to play Table Tennis.  However, he did not compete.

He appeared on The Tonight Show with Jay Leno earlier in 2006 and challenged Leno to a game of table tennis. He also read an original poem about love and the older generation.

A quieter and more reserved Florida Senior Games elder athlete, James Kales, was born and raised in Greece. He became the second 100+ year old athlete to compete when he won five gold medals in bowling and track and field in 2014.

He topped Gentilhomme’s 100+ age group record in men’s singles with a 15 pound ball, rolling a three-game score of 334, for a record which still stands.

Even though he kept a low profile, Kales real enjoyment at the Games was meeting other people and developing a different kind of “family friendship.”

Kales lived to celebrate his 101st birthday before he passed away in May 2016.

While no female athlete has yet to reach triple digits in competition, Lillian Webb, of Sebring came the closest and holds 10 age group records in bowling (2) and track and field (8) records in the 90-94 and 95-99 age groups.

Webb was named the 2004 FSG Female Athlete of the Year when she totaled five gold medals, winning three bowling events (singles, women’s doubles and mixed doubles) and the shot put and discus events of the track & field competition.  She averaged a 157 score in three games to win the 90+ singles bowling gold medal with a three-game total of 472. She rolled her high score of the weekend competition in women’s doubles with a 179 game.

Whenever she was asked about her longevity and success, she always attributed it to her ability to “stand up straight and walk fast.” She urged others to do the same.

These four athletes left their mark on the Florida Senior Games and gave inspiration to many who hope to follow in their footsteps.