Local Cyclist Climbs on Bike for Rides from 6 Miles to 2,000 Miles 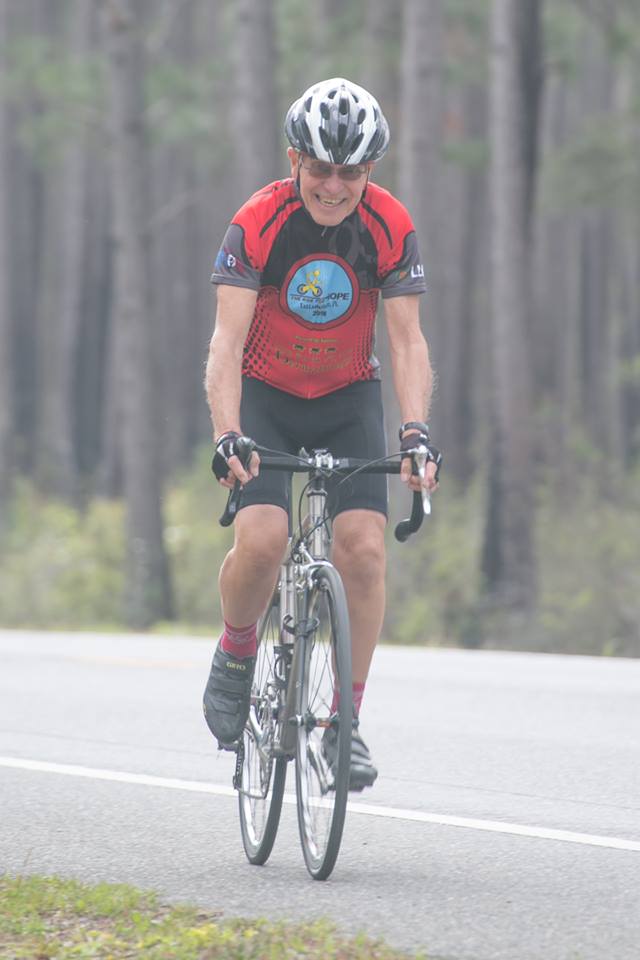 TALLAHASSEE, Fla. – Tallahassee cyclist Dennis Wirth won a silver medal in the 80-84 age group at the 2018 Florida Senior Games gliding through the 10K Time Trials at Fort DeSoto Park in just under 21 minutes.

That was an easy ride compared to his 2,000-mile ride to motor west on the highway that is best.

Yes, Dennis Wirth wound his way from Chicago to Los Angeles and got his kicks on Route 66.

Two years ago on August 27, Wirth and two friends, Ron Ray and Larry Kokesh, left Buckingham Fountain in Chicago on Route 66 with his daughters and grandchildren giving the riders a proper sendoff.  While his friends only made it to St. Looey and the Gateway Arch, his wife, Bonnie, followed along in an RV for the duration.

“We stayed in the RV, or camped, every night after riding about 40 miles a day” Wirth said. “It took close to three months to complete route. I finished the ride a week before Thanksgiving.”

Wirth’s attempt to have Ray and Kokesh make the cross-country journey was unsuccessful, due to the costs involved with accommodations along the way.  The pair was agreeable to his offer of spending time together on the bike for part of the way.

“We agreed that if we could keep our bikes on the RV, we would do the first leg,” Ray said.  “I didn’t want to go camping the whole time and went as far as the Arch in St. Louis. It blows me away that he did the whole trip.  Afterwards he was much stronger and faster on the bike.”

While Wirth is a relative newcomer to the Capital City Senior Games and Florida Senior Games, he’s been riding the roads for over 30 years.

He’s a two-time 10K Time Trials gold medalist in the 80-84 age group at the Capital City Senior Games riding in the Apalachicola National Forest.  He had some vastly different scenery, in the six-mile, grueling ride against no one but the clock, while earning his silver medal at the 2018 Florida Senior Games, riding near the Gulf of Mexico at Fort DeSoto Park.

He rides locally three days a week with a group called “Riding Not Working,” a group of retirees, including Ron Ray, and members of the Capital City Cyclists.  They have weekly scheduled rides through the rural areas around Tallahassee and South Georgia.

“I got involved in Senior Games to see how well I can do against others,” Wirth said. “I mostly ride with the Capital City Cyclists riding about 100 miles per week. We ride about 15 miles per hour for 2-3 hours.”

Besides enjoying the scenery from the seat of his bike, his time on the road has greatly benefitted his health as an octogenarian.

“It keeps me thin and my primary care doctor says I’m the healthiest 80-year-old in his practice,” Wirth said.

Wirth has lived in Tallahassee since 1984 and worked for the State of Florida for 15 years as a Senior Tax Specialist in the Department of Revenue.  When not pedaling his bike, he and Bonnie have traveled around the country to show Soft-Coated Wheaten Terriers.

The 10K Time Trials Route at the 2019 Florida Senior Games will not be as interesting as riding the conclusion of Route 66, on Santa Monica Boulevard, through Beverly Hills and Los Angeles, on the way to the Pacific Ocean and the Santa Monica Pier.

Dennis Wirth’s effort on his bike will not be any different as he pedals toward the finish line in December in Fort Lauderdale.