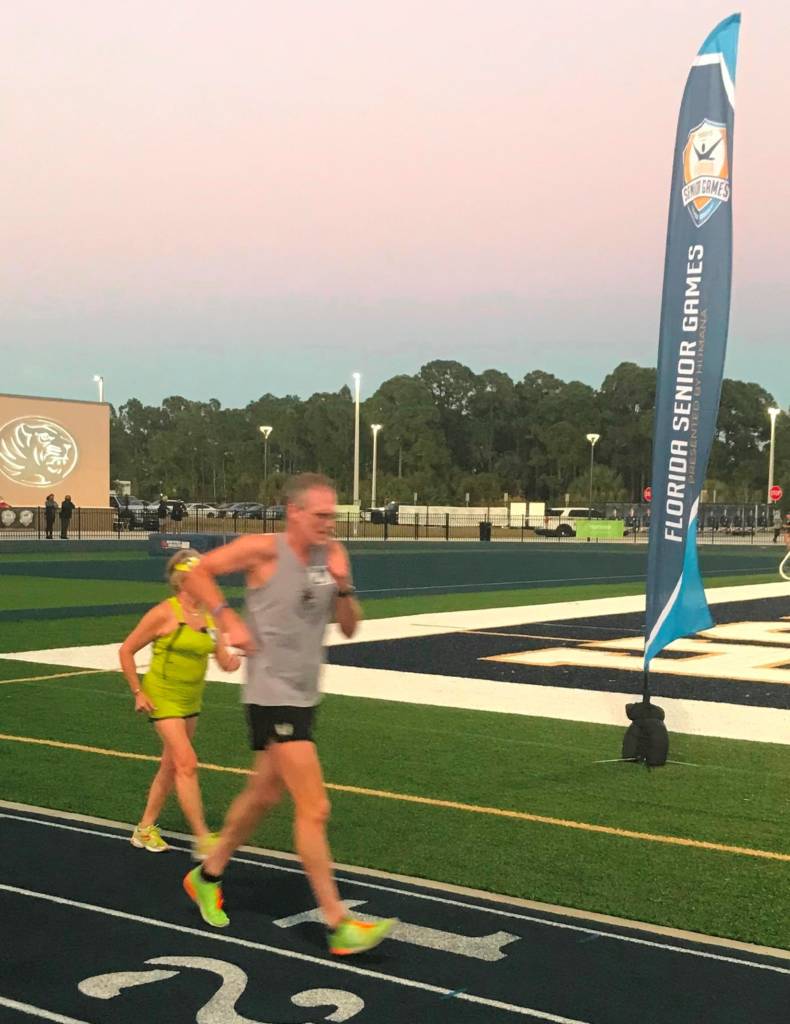 Swarts traveled to Florida from Jackson, Michigan, to establish the new mark and set a record in the 55-59 age group, circling the track 12 times to cross the finish line with a time of 24:26.37.  His time was 55 seconds faster than the previous best, set by Gene Opheim, of Tallahassee, in 1998.

On his way to Melbourne, Swarts made a stop in Tallahassee and won the AAU Race Walk National Championship, on Saturday, December 5.  He was the top overall finisher in the 5000 meter and 3000 meter races.  He won the 5K race with a time of 24:36.10.

The Florida Senior Games Race Walk Championships was only his third time competing since March 8.

“I was in a race in September, last weekend and today,” Swarts said. “Each time out, you get better.  Without any races I’ve only done light training for the last six months. There really hasn’t been an incentive to train hard.”

Swarts was a runner in his college years at Eastern Michigan University, but claims to have just been an, “ok runner.”  He began race walking 11 years ago at the age of 44.  Now 55 years old, he has won 55 USATF Masters Race Walk National Championships.

Haley has won Florida Senior Games Race Walk medals in each of the last six years.  She earned the Bob Fine Award for Race Walk Excellence in 2016 and 2018.

Achieving excellence on the Pickleball courts of the Sarah Vande Berg Tennis and Wellness Center in Zephyrhills was Deb Harrison, of The Villages, who won her 14th Mixed Doubles gold medal since 2004.  She teamed with Ted Meyer, also from The Villages, to win four matches in straight sets to claim the 70-74 age group gold medal.

Since 2004, Harrison, the 2018 Florida Senior Games Female Athlete of the Year, has won 37 pickleball gold medals in women’s singles and doubles and mixed doubles events. She has also won 21 table tennis gold medals in the same three events since 2010.

Over 500 pickleball matches were played in the five days of action of the 2020 Florida Senior Games.

In the Horseshoes competition, held at Clearwater’s Ed Wright Park, Charles “Buddy” Short, of Ocala won his sixth gold medal dating back to the 2000 Florida Senior Games.  Short was undefeated in four matches to win the 80-84 age group gold medal.  He amassed 215 points and hit 55 ringers for a 45.8 ringer percentage, the highest of all men’s competitors.