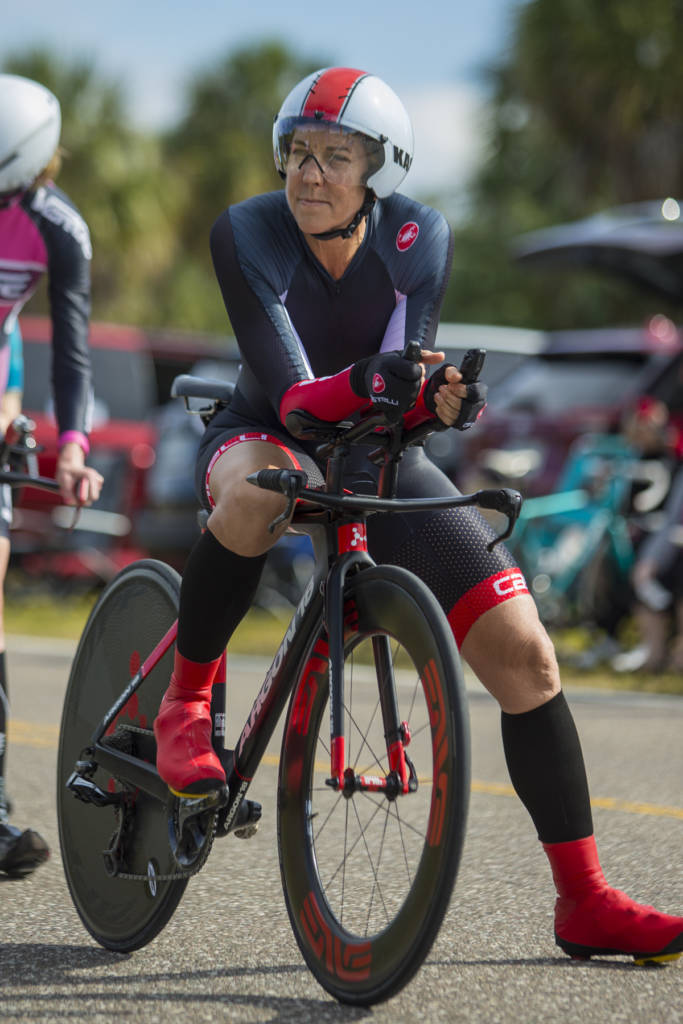 WESLEY CHAPEL – The only rider with two record-setting performances in the 5K and 10k Cycling Time Trials came by one who was riding nearly vertical rather than horizontal.

Steven Olsen, of Inverness (pictured above), set new records in the 60-64 age group of the Recumbent (meaning lying down) Cycling divisioin.

The recumbent bicycle distributes the weight of the rider evenly from the seat to the shoulders.

“I’m surprised more senior athletes don’t ride recumbent bikes or trikes,” Olsen said. “It’s basically for comfort with your weight being distributed all the way to your shoulders and not concentrated on a skinny saddle.

The only other record broken Thursday was by Joseph Frost, of The Villages, with the overall top time in the 10K Time Trials, a 13:31, to win the Men’s 50-54 age group gold medal. His time was 15 seconds faster than Dave Lewis’ time from the 2015 Games.

Kathy Petrillo, the 2016 Florida Senior Games Female Athlete of the Year, from Jupiter, (pictured at right) had the top women’s times in both races.  She won the 55-59 age group 5K gold medal with a time of 7:42 and the 10K gold medal riding the course, at Fort DeSoto Park, in 14:48.

The best Tennis match of the 2020 Games was saved for the last of six days at the Innisbrook Tennis Center.  In the finals of the Mixed Doubles 75-79 age group, Emily and Doug Speaker, of Ocala, battled it out with Patsy Rucker and Tom Burgess, of Summerfield, in a match lasting just over three hours, according to sport director Joe Mattingly.

The Speakers lost the first set of the match 7-6, but rebounded to win the second set 6-4.  In the tie breaking final set, the Speakers prevailed, 10-8.

“Those two teams have been going at it in the Senior Games for the past few years,” said Mattingly.  “It was a good win for the Speakers.”

Burgess and Rucker won the gold medal in the Mixed Doubles 75-79 age group at the 2019 Games, defeating the Speakers in the championship match.

In the first of two days of Mixed Doubles Pickleball, 49 teams from the three youngest ages were on the courts at the Sarah Vande Berg Tennis and Wellness Center in Zephyrhills.  Cassandra Steward, of Lady Lake, and Doug McClintock, of The Villages, breezed through the Mixed Doubles 60-64 age group bracket winning five matches in straight sets.  They defeated Lori and George Gamboa, of Elkton, 11-9, 11-9 in the final.   Steward was stellar on the court winning the 55-59 Women’s Doubles gold medal on Wednesday with Jana Spano.

Mixed Doubles Pickleball continues on Friday with 38 teams playing in the 65-69 age group and up. It is the final day of five days of Pickleball in the 2020 Games. In the previous four days 32 age group champions have been crowned in 446 games played.