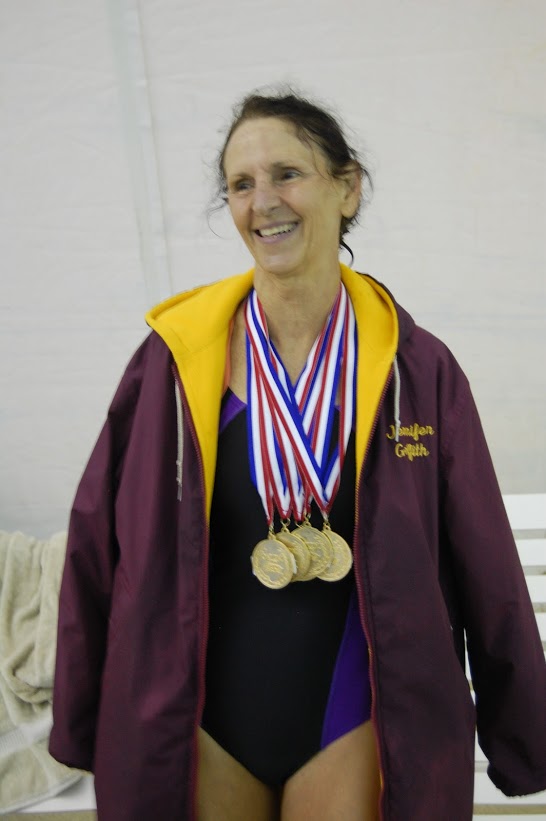 TALLAHASSEE, FLA. — Good things came in fives for Jaqui Griffith as she prepared for her 2020 Florida Senior Games journey.

Her five events, all 100 yards and over, covered a total of 1,000 yards, or 3,000 feet, over a half mile. She swam 40 laps using three different strokes, the freestyle, breaststroke and backstroke.

A competitive swimmer in her youth, she had a feeling she was breaking records. However, her main goal at the CCSG was to qualify for the Florida Senior Games. Something that was never in question.

Another equally impressive fact in her five-for-five gold medal winning performance in the March Games is that it was her first competition since college.

“I had not been in a competitive swimming event in 40 years,” Griffith said. She swam throughout her youth, into high school, and a year at the University of Florida. She then continued her collegiate career at Southeast Missouri State in Cape Girardeau, Missouri.

To lead up to her return to the starting platform, Griffith worked out on her own and joined the Seminole Masters Swim Club. She worked out with the team for three practices prior to her record-setting performances at the CCSG meet.

Two days after claiming her fifth gold medal, all athletic facilities were shut down due to the COVID-19. To continue her quest to swim in the 2020 Florida Senior Games, she swims on her own at the FSU Morcom Aquatic Center.

Griffith became a Tallahassee resident in 1981 to complete her master’s degree in Nutrition. The degree led to a career as a registered dietician and work in clinical settings advising people how to eat. “It’s all about food and health,” she said.

When not in the pool, Griffith works at Just Get Fit Gym advising clients on mental and physical health. To add to her already busy schedule in and out of the pool, she also works with Center Pointe Health and Rehab.

In addition, she serves as a corporate dietician for Quest Management, where she manages the developmental center for physically and intellectually disabled individuals.

Both of her children, Scott and Jennifer, followed her footsteps to the platform and swam competitively in high school and for the Area Tallahassee Aquatic Club (ATAC). It was at her children’s meets where she became involved as a swimming official. She regularly officiates swim meets for the Florida State swim team and ATAC meets.

“I was around the pool as an official quite a few years before getting into the water as a senior games athlete.” Her officiating mentors, Barbara and Jack Goltz, were the ones who recruited her to compete in Senior Games competitions.

While working at the meets, Barbara must have seen someone like herself in Jacqui and told her how much fun she had swimming in Senior Games events.

“She encouraged me to be a swimmer and mentored me as an official.” It didn’t take too much encouragement from Goltz, a Florida Senior Games swimming record holder and National Senior Games medal winner. “We talked from time to time and she would tell me about her progress,” Goltz said. “I said the Senior Games would be a good test to see how she was doing in her training. Jacqui has worked really hard and is a great representative of Tallahassee.”

Now that Griffith has experienced the CCSG experience, she wants to help recruit athletes to help the Games grow. “I’ve been telling my friends to try it out next year.” The method of recruitment from Barbara Goltz to Jacqui Griffith is the tried and true method of expanding the Florida Senior Games programs.