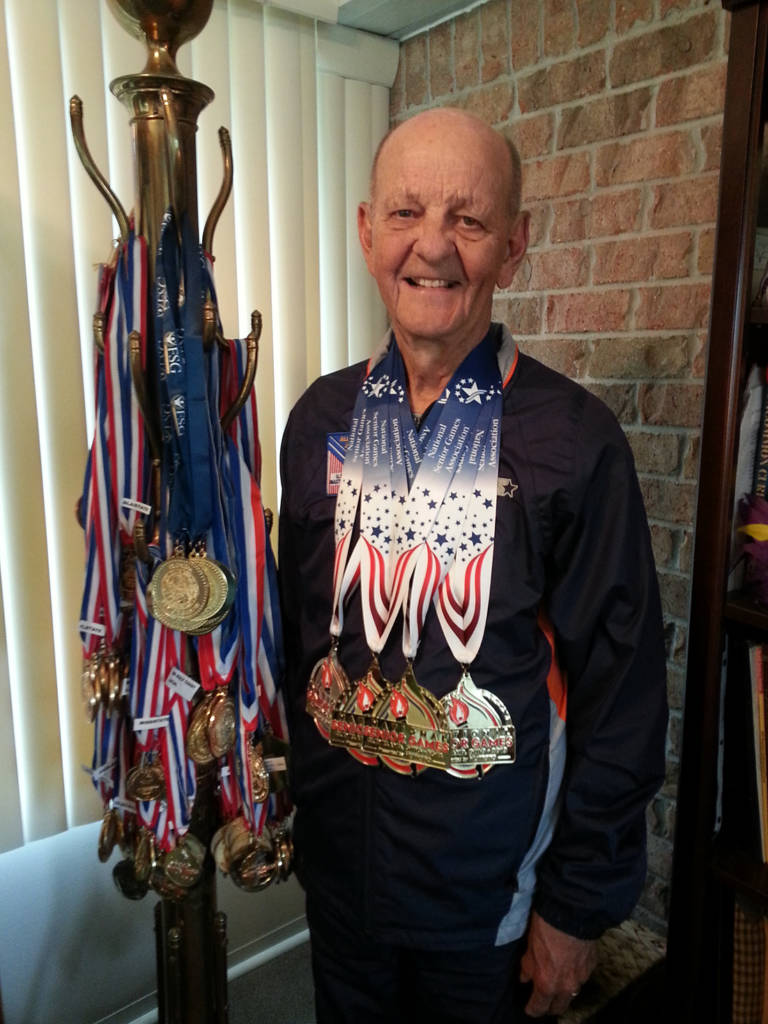 TALLAHASSEE — In a normal year, the Pensacola Senior Games would have come to a conclusion on Sunday, September 27. As we all know, 2020 has been less than normal.

Also, in a normal year, Northwest Florida’s most consistent sprinter, John Hurd, of Navarre, would have walked away with a gold medal in his final year of competition in the 85-89 age group.

His last Florida Senior Games performance came in 2018 when he added to his gold medal total, winning all three events in the 85-89 age group.

Should he compete in the 2021 National Senior Games, Hurd will be running in the 90-94 age group.

“I hope to run in the National Senior Games in Fort Lauderdale,” Hurd said. “I was having some dizzy spells a couple years ago and wound up with a pacemaker in January 2019. I’m still working out three days a week but can’t run a complete workout.  I’m doing all of the exercises and stretching, but not running as many sprints.  Not that I ran that many to begin with.”

Even though he’s on the high end of the 85-89 age group, Hurd continues to stay active.  Not even Hurricane Sally, which recently made landfall near his Navarre home could keep him from filling 62 bags of debris and hauling fallen limbs to the street for pickup.

For such an accomplished Florida Senior Games athlete, it’s hard to believe he didn’t start his successful sprints until he was 61 years old at the 1993 Tennessee SportsFest. Nearly 30 years later, Hurd has won 156 gold medals for his efforts on the track.

Hurd and his wife, Sandy, moved to Northwest Florida in April 2003.  At that time, he was continuing his successes after years in the Tennessee Senior Games and representing the state at the National Senior Games.

Hurd chronicled his successes in a 2015 book, Johnny Run Lately… Life and Adventures of a Latter Day Sprint Champion!

He won a silver medal at the 1993 Tennessee SportsFest after nearly a year of training that began with vigorous walking.  He has picked up the pace since then and not looked back.

“June 12, 1993 finally came, and I entered the 100-meter competition in my first meet.  I was pleasantly surprised at the welcoming attitude of the other athletes. There were only two others in my age group, Hugh and Ed Redditt.  Ed won, and I managed to beat Hugh for second place. Sandy was really excited because I received a 2nd place ribbon.”

His success continued, and he felt confident enough to run in the 1995 National Senior Games in San Antonio, Texas.  Even though he claims he was not ready for prime time, he admits patience is not one of his virtues.  Running in the 100- and 200-meter dash and 400-meter run, he did not advance to the finals of any of the races.  After the 1995 National Games, he dropped the 400-meter run because it involved a different type of training.

What makes a retired computer software engineer who worked for the likes of IBM and developing punch card ballot software, take up sprint races at the age of 61?  Here’s the reason.

“I think the real answer to why I started to run is that I wanted to see if I could be good enough to enjoy some of the fun things I didn’t get to do while I was in school. If I trained really hard, I could envision myself perhaps someday wining a state championship. Well, if I had wanted to do it then, why didn’t I?  Because I was too little.  When I was in the 10th grade in high school, I was 5 feet 0 inches tall and weighed 92 pounds, about the size of a typical fifth grader.”

John Hurd’s state champion came true many times over, in Tennessee and in 2003 in Florida.  He took it a step further as a national champion in 2013, winning four gold medals in three days in the 80-84 age group.

“I was one spent young man after those three days, but I had a feeling of euphoria unlike almost anything I had ever felt before. I had trained and competed every week for 20 years, not always as diligently as I should have and certainly not always patiently, but with the dream that eventually I would get the brass ring. I took home four of them from Cleveland. To have two friends take their entire day off to drive the miles and be there for that most meaningful day, and to have one of my three sons there to share every minute of the 72 hours with me, was an extra special blessing that I could have only hoped for.”

He repeated the multiple gold medal winning performance at the 2017 National Senior Games, in Birmingham, Alabama.  The 2017 performance was even more rewarding due to the location.

John Hurd has been a champion in six different age groups since 1992.  When he runs his events, that don’t even total two minutes in elapsed time, he runs with a form comparable to Olympic sprinters.  His shoulders are square.  His head held high and his eyes focused on the finish line.

He’s had a clear vision of the finish line in Florida Senior Games races because there has been no one ahead of him.