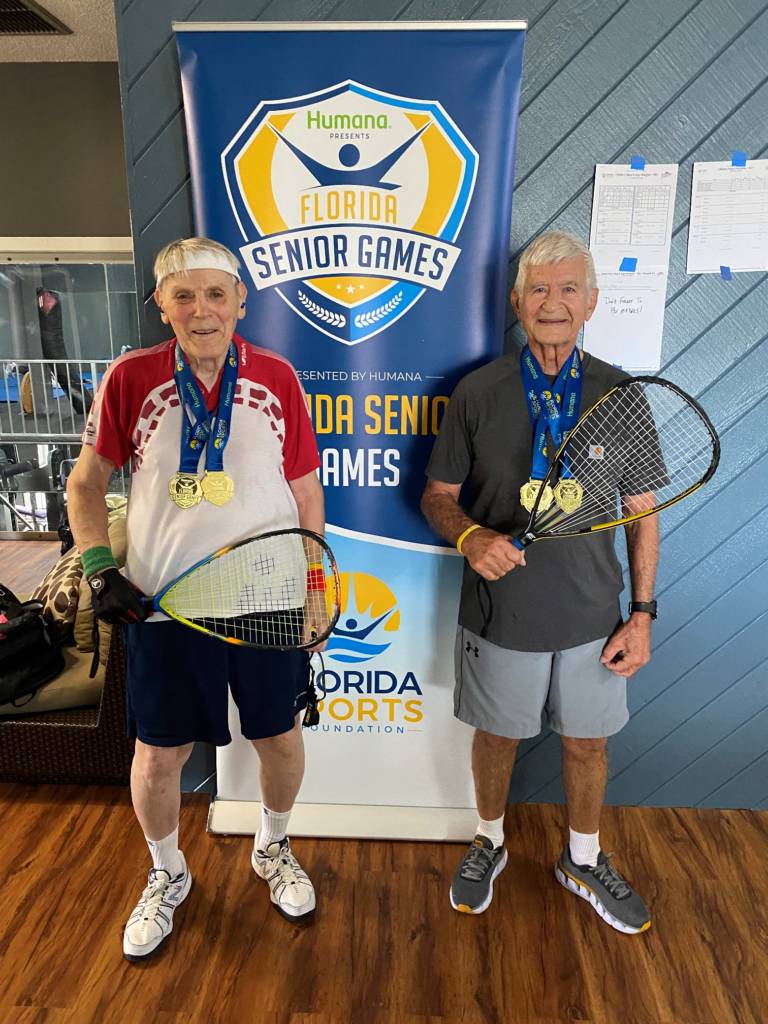 Jimmy Petrandis has been playing racquetball so long that when he started playing the game it wasn’t even known by its current name.

“I’ve been playing forever,” Petrandis (on right in photo), who won a pair of Racquetball gold medals at the 2020 Florida Senior Games. “I began playing when it was called paddleball and you played with a wooden paddle. I probably started playing in the 1950s.”

Until 1969, the sport fell under the National Paddle Rackets Association and was known as Paddleball.

Petrandis’ game grew along with the popularity of the sport in the 1970s in Tallahassee and he’s still on the court and winning Florida Senior Games medals in the 85-89 age group.

While his family name is well known in Tallahassee for ventures in restaurants and real estate, Jimmy Petrandis has been an ambassador for racquetball.  His athletic career goes back to being the co-captain of the 1953 Leon High School football team.

He played racquetball in Tallahassee when the only courts in town were three-wall courts at Florida High School, when it was on the FSU campus.  He and a group of racquetball-playing friends, including his brother Johnny, built the first four-wall racquetball court in Tallahassee in the mid-1960s. It was on what is now a vacant lot on Gadsden Street, between College and Park Avenues.

The court became a “Who’s Who,” of Tallahassee businessmen and politicians.  Playing the ball off of any of the four walls included local lawyer Dubose Ausley, Paul Morgan, the founder of Morgan Electric and former FSU President Sandy D’Alemberte.

“Bob Graham even stopped in to play a time or two when he was Governor,” Ausley said.

The downtown court hosted tournaments in the 1970s and 80s and Petrandis competed in the Sunshine State Games, Florida’s Olympic-style Sports Festival for athletes of all ages, into the 1990s. Petrandis is still on the court sending the ball into the wall three times a week at Premier Health and Fitness.

At the 2020 Florida Senior Games, at Richey Racquet Club in Port Richey, Petrandis played in Men’s  Singles and Doubles, with 90-year old Don Husman, of Atlantic Beach.  He played against Husman in singles, winning both matches in a best of three series and the two paired to play a match against a 70-74 age group team.

“He was quite a character,” Petrandis said of his doubles partner, Husman. “I enjoyed playing with him. “We came close to winning the second game of the match.”

His continued racquetball success comes as no surprise to his long-time racquetball playing friend, Dubose Ausley, who also played football with Petrandis at Leon High School. ,

“He’s a really good racquetball player and has amazing hand-eye coordination,” Ausley said. “He was a good football player also, kind of small but everybody was then, compared to today.  He was fast and he was tough.”

His brother Angelo, picked up the family business and owns the long-time area favorite Angelo’s at the Ochlockonee River Bridge in Panacea.  His nephew, Thomas, owns the Tropical Trader restaurant in the same area.

When not on the racquetball courts at Premier Health and Fitness, Petrandis can be found on the gulf fishing.  Not for the family business but for personal consumption.

His gold medal winning performances at the 2020 Florida Senior Games earned Petrandis a spot in the 2022 National Senior Games.  He’s considering a trip to the Greater Fort Lauderdale to represent North Florida in the Games.

“I’m thinking about playing,” he said. “If I can keep my body together. I’m being held together with wire and nuts and bolts.”

For eight decades, Jimmy Petrandis has proven himself a success in athletics and business. His success will inspire others for eight more decades into the future.